From Israel: Center of the World

Today is Yom Yerushalayim.  We celebrate the unification of our holy city.

Fifty one years ago, during the Six Day War, we liberated eastern Jerusalem from the Jordanian occupation that had existed since the War of Independence.

That 19-year period of occupation was the only time the city was divided since King David established it as his capital 3,000 years ago.

The heart of historic Jerusalem was again in Jewish hands: Har Habayit, the adjacent Kotel, the ancient cemetery on the Mount of Olives, many synagogues (or the ruins of those synagogues), and more.

Here we see Rabbi Shlomo Goren, Chief Rabbi of the IDF at the time, at the Kotel after liberation: 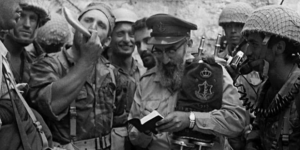 ~~~~~~~~~~
Over the years, much work has been done as Israel has rebuilt this part of the city, which had been ravaged by the Jordanians.  The Jewish Quarter was restored. 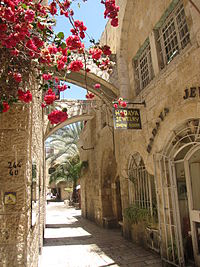 A plaza was established in front of the Kotel, where there had been only a narrow walkway. 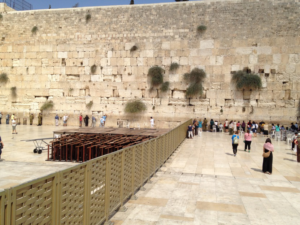 An underground tunnel adjacent to the Western Wall was excavated. Running the full length of the Wall, it is many times the length of the exposed portion we call the Kotel. 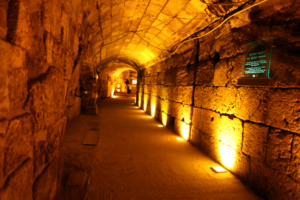 Work was done and continues on excavations at the City of David (Ir David), right outside the Old City.  This is believed to be King David’s original Jerusalem. 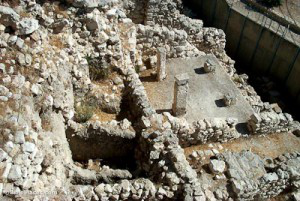 And on and on, as we develop our city in all of its ancient significance and modern splendor: It is a labor of love.
~~~~~~~~~~
By 1980 the Knesset had passed Basic Law: Jerusalem, complete and united, is the capital of Israel.

From the time that Jerusalem was King David’s capital, until it became Israel’s capital in modern times, it was never the capital of any other nation or empire, in spite of the fact that this area was controlled by numerous occupiers.

In the most profound sense, Jerusalem is Jewish.  Let it be clearly understood that our capital – which provides freedom of access by all religions to their holy sites – will never be divided again.

Please, take the time to read about our historical and legal rights to all of Jerusalem:

https://www.arlenefromisrael.info/a-unified-jerusalem-israels-rights/
~~~~~~~~~~
This morning thousands of students from institutes of Torah study (Yeshivot) from around the country gathered at the Kotel for prayer and celebration.  See here a number of lovely pictures and watch the short video of celebration, which conveys the power of feeling for Yerushalayim.

This is especially moving for me: I have a grandson participating in these celebrations.
~~~~~~~~~~
Annually on Yom Yerushalayim, there is also a flag parade late in the afternoon.  It makes its way through the streets of Jerusalem to the Kotel, with thousands participating with song. 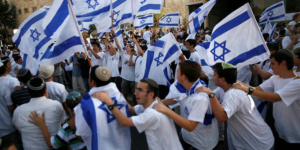 In this respect, this year is no different: the flag parade will proceed.
~~~~~~~~~~
But this year IS different, because President Trump has recognized Jerusalem as Israel’s capital.  And today’s celebrations will be followed tomorrow by the official opening – to great excitement – of the US Embassy in Jerusalem.

The signs have already been put up, and all preparations have been completed.

The official embassy at this point will be housed in the US Consulate located in the Arnona neighborhood of Jerusalem.  It has been providing consular services in its current location since 2010, when it moved into a new building constructed for that purpose.  Facilities for the ambassador’s office have now been established, with adjustments for stringent security.

It is not a large building. The staff of the embassy in Tel Aviv totals many hundreds.  Construction of a new building or renovation of an existing building, to house this entire staff, is expected to take years.
~~~~~~~~~~
US Ambassador to Israel David Friedman, who is tremendously excited about this event, will lead the opening ceremonies. The delegation from the US includes Treasury Secretary Steven Mnuchin, Envoy Jason Greenblatt, Jared Kushner, Trump’s senior adviser and son-in-law, and Trump’s daughter Ivanka.

The delegation has already arrived in Israel.

President Trump, who had considered coming, in the end has decided to do a video address.
~~~~~~~~~~
My friends, there are many, myself among them, who have always felt that Jerusalem is the center of the world. The energy that radiates here can be felt by those who are attuned to it.

A pastor named Heinrich Bunting understood this back in the 1500s.  He is most famous for the woodcut map he made, which indeed you may have seen.  I think it speak volumes about Jerusalem: 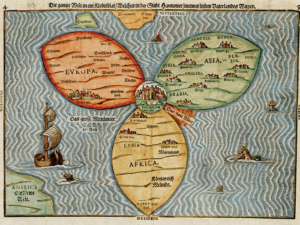 Today events around the world increasingly point to Jerusalem. And so here in celebration I share just a few.
~~~~~~~~~~
Other nations are following the example of the United States, and are making plans to establish their embassies in Jerusalem.

The flag of Guatemala has already been raised at the tower at Malcha, where the official opening of its embassy will take place in on May 16. 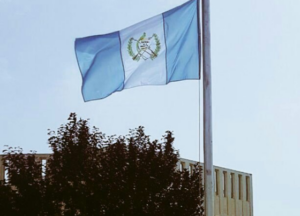 Paraguay is also planning on moving its embassy to Jerusalem.  President Horacio Cartes wants to complete this process before he leaves office in June.

The Honduras National Congress has approved the move of its embassy to Jerusalem as well.

While last month, Miloš Zeman, the president of the Czech Republic announced the beginning of a process that will move the country’s diplomatic missions from Tel Aviv to Jerusalem; it will begin with the appointing of an honorary consul in Jerusalem.
~~~~~~~~~~
And speaking of the Czech Republic:

The Czech Republic, along with Hungary and Romania on Friday blocked a joint EU statement criticizing the relocation of the US embassy to Jerusalem.

The initiative for the statement was led by France. Its goal was to present the statement in the name of EU foreign policy chief Federica Mogherini and supported by all 28 EU members – to show a united position against the US embassy move, and to isolate the Trump administration ahead of Monday’s ceremony.

Not only did this not work, it seems Romania is also considering a move of its embassy to Jerusalem.  And, trust me, this is just the beginning.
~~~~~~~~~~
There is so very much more that is positive that I will share in my next posting.  I am limiting this post to Jerusalem.  But there is much more to say, for example, about the Iranian situation and Israel’s relationship with Russia.

I am also forgoing here, as well, details of the ugly news regarding Palestinian Arab violence, which we must and will deal with.  We have just destroyed another Hamas tunnel.  Hamas Prime Minister Yahya Sinwar has declared that he will be at the fence himself along with the many thousands he hopes to bring along for “Nakba Day” tomorrow.  Three IDF Brigades will be on high alert.
~~~~~~~~~~
And so I end with news about the Eurovision Song Contest which took place in Lisbon last night.  Israel’s Netta Barzilai won with her song “Toy.”

I confess, I am too old, too traditional, to relate to the sounds of her song.  But I understand that it resonated with #MeToo, declaring “I am not a toy.”

“The song has an important message — the awakening of female power and social justice, wrapped in a colorful, happy vibe,” she said this week. 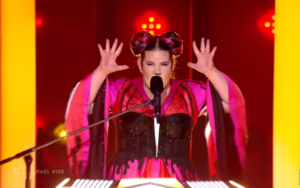 What’s significant here is that with voters from many countries participating, the Israeli contestant won. This hasn’t happened in 20 years.

There was an attempt by Eurovision organizers to play down the fact that Jerusalem is Israel’s capital.

But in the end, as she learned of her victory, she made it clear for all to hear:  “Next year in Jerusalem!” she exulted.  The capital city of the winner’s country always hosts the next contest.  This can only serve our image well.
~~~~~~~~~~