Magic only in this sense: Now you see it, now you don’t.  Sort of like the rabbit: 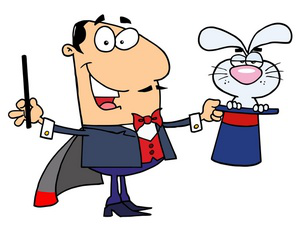 Except that it’s not nearly as much fun as the rabbit.

Last night (Monday), news sources announced that Israel and Hamas, with Egypt and the UN mediating, had agreed to a six month “ceasefire.”

My response was pretty straightforward: I was furious. 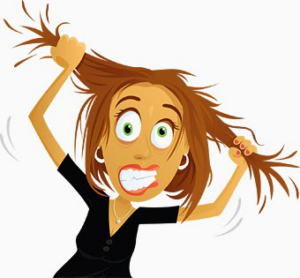 What happened, I asked rhetorically, to our tough-talking prime minister who told us ‒ when hostilities were halted prematurely before Yom Hazikaron/Yom Ha’atzmaut ‒ that it wasn’t over yet?

I also wondered what happened to the people on the right who were just elected to the Knesset but who seem to be unable to get their acts together to form a government to deal with this.

By this morning (Tuesday) there were disclaimers from both sides – denials that there was a “ceasefire.” A statement from Hamas indicated that “contrary to reports, there is no understanding between Israel and Hamas on a six-month truce.”  And the prime minister’s office released a statement that, “There are no new understandings with Hamas.”

Well, then, this may be good news.

In any event, I want to provide here, briefly, major points arguing against a “ceasefire.” Who knows?  Tomorrow we may hear about it all over again.

Here’s the catch: this isn’t truly a “ceasefire,” no matter how the media may refer to it.  Who ever heard of a temporary ceasefire?  Except, that is, when dealing with Muslim radicals.  It is a Muslim hudna.  And that is what is wrong with it.

A ceasefire is a cessation of hostilities, a preliminary step towards establishing a more permanent peace.  It might fail, but it reflects intent to be peaceful.

What we’ve got here is a situation in which the intent of Hamas to destroy Israel has not changed one iota.  It simply suits their purposes to refrain from activity towards that end for a period of time.  It gives them an opportunity to increase and improve their weapons cache, further train their terrorist fighters, and build more of those damn tunnels (inside Gaza, for purposes of weapons storage and warfare).

THIS ssHIS is why I am opposed to it. We have ample precedent in dealing with them: They will start again when they decide the time is right.

Were they willing to call a halt because they were afraid of us, because we had driven them to submission, it would be a whole other story.  But this is not the case.

Nor is it the case that they would be required to partially dismantle their weaponry.  This, they adamantly refuse to do, which is the tipoff to their intentions.

Of course, they might also agree to a “ceasefire” because of the multiple benefits that would accrue to them. The catch here is that those benefits do not pacify them or change their ideology. They have said it themselves: they cannot be bought.

But no matter, we try anyway.

Some months ago, when a “ceasefire” was under discussion, Hamas official Mahmoud Zahar said, “We benefit from the truce…Our weapons will remain in our hands and there are no conditions regarding Hamas’s right to the resistance.” 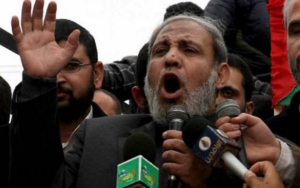 In January, when Israel had approved $15 million in Qatari funds to go into Gaza to pay Hamas salaries, Hamas decided to refuse it because “Gaza will not be subject to extortion by Israeli election theater.”

All of this said and done, this is what I have concluded: There IS an understanding between Israel and Hamas, but of a more informal nature, and without the six month time frame.

The giveaway here is the fact that it has just been announced that COGAT is expanding the fishing zone to 15 nautical miles. The reason given is “to prevent a deterioration in the humanitarian situation.”

But it might just as readily be that this is part of an informal “ceasefire” understanding, disclaimers notwithstanding.

We must watch now and see what other terms of the non-existent agreement are set in place.

From our side it would involve such actions as increasing electricity and opening the crossings further.

From the Hamas side, it would involve halting violent incidents along the border fence, maintaining a buffer zone 300 meters from the border; and ending the launching of incendiary balloons. (All said to be part of the formal six-month agreement when announced.)

Please, do not hold your breath on all of these stipulations. And understand that if it is not a formal “ceasefire” we are looking at, there is always deniability.

But I raise a few final questions here regarding the “ceasefire,” whether formal or not:

[] Why does our government agree to any benefits for Hamas without demanding the return of the two Israeli civilians and the bodies of the two soldiers, Hadar Goldin and Oron Shaul, being held by Hamas?

This is always tabled for later, down the road, and is likely to involve an exchange, with some Hamas prisoners in Israeli prison being released.

[] How will Iran’s desire to stir things up, particularly via the renegade Islamic Jihad, play into this?

[] And what influence is it likely that the Trump administration has brought to bear on Israel to keep matters quiet?  That quiet, along with some building up of Gaza, would fit in with the soon-to-be-released Deal of the Century.  Hostilities would be seen as counterproductive to that major venture.

With regard to the Deal of the Century: Never, ever, do I recall so much hype, so much discussion, about a projected undertaking before it is even unveiled.

But at long last, apparently the economic aspect of the plan will be unveiled at an economic conference to be held on June 25-26 in the Gulf state of Bahrain – in its capital and main city, Manama. 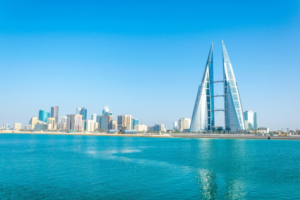 The goal here is to garner support for “economic initiatives” (infrastructure, industry, etc.) that might be possible within the peace plan. This means it is a bit open-ended, with efforts to entice the fiscal involvement of Arab states. To that end, it is considered by some to be of major importance that Bahrain was ready to host what is being referred to as an “economic workshop.”

Other commentators argue that this “workshop” is likely to fizzle.

Hamas is condemning the effort and the Palestinian Authority is declaring intention to boycott it.  The Jordanians – who do not have the largesse to contribute fiscally in any event – are exceedingly nervous about the plan and how it will impact them, while Egypt’s al-Sisi is not terribly positive about it either.

Perhaps most significantly, the Gulf States are far too concerned with Iran to focus on issues involving Palestinian Arabs.

The fact that the political aspect of the plan will not be unveiled yet further complicates matters, rendering the Arab states wary about lending support.

Key Trump advisor, Jared Kushner, speaks in general terms about government, civil, and business leaders coming together in order to build “consensus around the best steps the international community can take to develop the foundation for a prosperous future in the region,” particularly for Palestinians.

But he also says, “Economic progress can only be achieved with a solid economic vision and if the core political issues are resolved.” (Emphasis added)

This is a bit of a chicken and egg situation, the way it’s being presented. 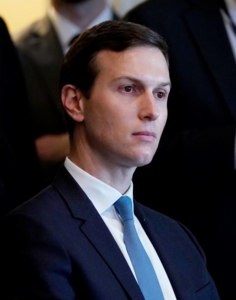 The Palestinian Authority has been, so to speak, on the back burner, with everything going on.  But it’s time to take a closer look at what’s happening with them.

I have been saying for years that the PA will not agree to terms for a “peace” settlement unless they get everything they want: they will not compromise on Jerusalem as their capital; on the 1949 armistice line, which they call the “’67 border,” as their border; on return of “refugees,” etc.  And that their goal is, of course, not two states side by side, but the destruction of Israel.

But in point of fact, there is more going on than this.  The bottom line is that the erstwhile leaders of the PA cannot agree to a settlement under any terms.

The way in which the Palestinian Authority operates is by presenting itself as a victim, being taken advantage of by the “occupier” Israel, and thus in need of assistance and diplomatic support from the world.  They expect to be cut slack.  And the world has accommodated them.

Were they to become a full-fledged sovereign state, there would be international expectations that they function responsibly as a state. That image of a “people” denied what it rightfully seeks would be gone, and Palestinian Arabs would be expected to stand on their feet.  This role, which they are not equipped or prepared to assume, terrifies them.

Compare this with the Jewish Yeshuv – the Jewish community of Palestine during Mandate times.  The Jews, dedicated to the founding of a Jewish state, did everything possible to prepare for its establishment without outside assistance. They developed a vibrant society, and established national and political institutions.  When the time came to declare independence, everything was in place – because the people were dedicated in the most positive sense to building their future.

The history of the Yeshuv is about as different from the functioning of the PA as one could get.  And comparing the two makes it very clear indeed – the Palestinian Arabs do not want a state.

Now, if only the world would come to understand this.

As to paying salaries, there is much that is politicized, and a great deal of game-playing transpires.

The PA, and specifically Mahmoud Abbas (looking perhaps a bit confused, below), has withheld salary payments to civil service workers in Gaza in order to weaken Hamas.

And Abbas insists, before everything else, on paying salaries to terrorists in Israeli prisons, and to the families of terrorists who have been killed “in service.” 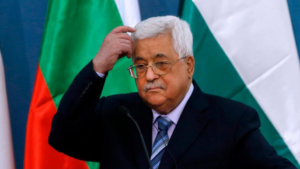 Some weeks ago, Israel, by law, began deducting from tax revenues collected on behalf of the PA the amount paid to the prisoners.  The remainder was transferred to the PA, but repeatedly, Abbas has returned it, declaring nothing would be accepted if there were improper deductions being made.

This may seem counterintuitive to the Western mind, as the PA is said to be in dire financial straits.  But, aside from issues of honor (the PA being part of the honor/shame culture), Abbas, I was given to understand, wanted the world to see that Israel was responsible for Palestinian Arab suffering. Better Palestinian Arabs should suffer (PA civil servants are receiving only a fraction of their salaries), if it made Israel look bad.

Abbas has appealed to Arab states for assistance, but he is now beginning to encounter suggestions that he cooperate with the Trump deal. Perhaps we may be seeing the beginning of the end of the “free lunch” for the Palestinian Authority.  If this turns out to be so, we will have President Trump to thank for it.

My friends, I will likely not write again until next week. In truth, I might write twice a day and still find it difficult to keep up with this fluid and complex situation. I am learning to take deep breaths.

What I ask, please, is that you broadly share this material, which is so filled with information and perspective.