I have been advised by a highly reliable inside source that a phone call from Prime Minster Netanyahu to President Trump has a good chance of achieving the release of Jonathan Pollard from his parole restrictions and making it possible for him and his wife to come to Israel at long last. 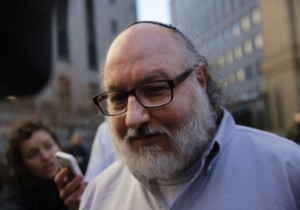 If you believe that Pollard has received a raw deal, as do I, and that it’s past time to close that chapter on his life, please take the time to send a message to Prime Minister Netanyahu requesting that he make that call. Keep it brief and polite.  Remember that numbers count.

Send an email using both addresses:

Or use this form on the Internet:

If there is a possibility that Pollard might come home at last, we can feel that we are moving in the right direction.  And we can see some indication of this in another regard as well.

As my readers are well aware, I have expressed great weariness with our election campaign, which to date has consisted primarily of personal attacks and inanities.  My lament has been that the parties provide precious little focus on what they truly stand for.  We’ve been fed negative rhetoric without serious import.

But now there are the signs of a shift in this dynamic.

I was dubious about Ayelet Shaked when she stepped forward to lead the joint right wing parties.  I felt she hadn’t shown solid leadership when she followed Naftali Bennett – apparently with great ambivalence – in breaking off from Bayit Yehudi to form the New Right; he seemed forever in charge.

But polls indicated that she would attract the most voters.  And so, Rafi Peretz, head of Bayit Yehudi, who had assumed leadership of the united right parties, stepped back to allow Shaked to lead.  And what we are seeing is that not only is Ayelet Shaked coming into her own – with expressed intention of going right to the top in time, so is the merged right wing group she heads.

The group had its formal campaign kick-off on Monday and the energy was encouraging.  They announced their new name: Yamina, which means rightward, or in the direction of the right, and their campaign slogan: “Israel wants to go right.” 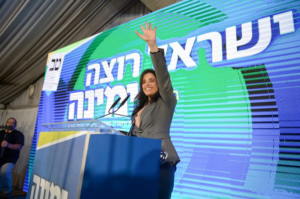 Most important was the focus of Shaked’s message. She actually spoke about what Yamina offers (emphasis added):

“Yamina isn’t just a name – it’s also the essence. Right is the direction in which we want to lead Israel. Right is the spirit of the generations blowing in our sails…

“…Yamina is a combination of the Jewish Home, the National Union, and the New Right. I won’t deny it. We don’t have a consensus on every issue. But on one issue we are unanimous: The challenges before us are greater than the differences between us, and so our strength lies in our unity and not our uniqueness.

And from a party statement:

“…the name ‘Yamina’ was chosen because it expresses the clear goal towards which members of the list want to lead the government and the Knesset:  Rightward – in economics, in settlement, in law, in security…We’re going to pull the ship’s steering wheel in that direction.”

I deeply regret at this point that neither Zehut nor Otzma is planning to drop out – or, put differently, I deeply regret that these parties were not – for whatever reasons – enfolded into the Yamina group to ensure greater mandate strength.

Prime Minister Netanyahu is doing his own campaigning, of course.

His forte is international relations, and the latest news is that he is going to Kiev on Sunday. The first Israeli prime minister to visit the Ukraine in 20 years, he will meet with recently elected Ukrainian President Volodymyr Zelensky (pictured), who is Jewish and, interestingly, a comedian.

The visit should sit well with Russian voters, but according to a Russian news source, it is part of an effort, spurred by the US, to encourage a good relationship between the Ukraine and Russia. 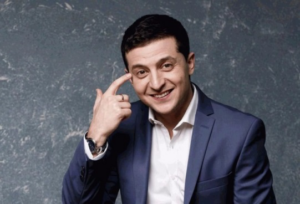 We know that Netanyahu’s greatest pride within the international sphere is his close relationship with President Trump. Now rumors have it that he is seeking the president’s endorsement for application of Israeli sovereignty to the Jewish communities of Judea and Samaria (i.e., the “settlements”).

Were he to achieve this before the election he would hail it as a great accomplishment. Some, however, see this differently.

The settlements comprise less than 6% of Area C.  To apply Israeli sovereignty just to that small percentage of Area C – which in total is 60% of Judea and Samaria! – might signal tacit relinquishment of the other 94% of Area C (especially if Trump only “approves” that 6%).

This would be both shortsighted and dangerous. Not only do we have a legal right to all of Area C, it has significant security value; for this reason alone there should be no suggestion of relinquishing it.

The fact that our prime minister has over the last ten years already turned a blind eye to the building of 28,000 illegal Arab housing units in Area C suggests that he might be willing to sacrifice large swaths of that region.

Seen here, a view of the Binyamin Regional Council 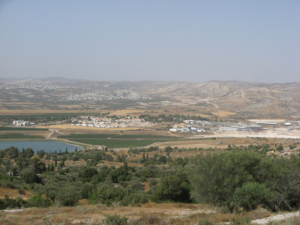 And there is yet more: It is not for the head of another government to approve or disapprove our claims to our land, nor should we seek sanction before registering such claims.  Pursuing this avenue sets a bad precedent.

I encountered a report indicating that the Likud campaign will focus on encouraging passive Likud supporters to actually come out and cast their ballots, rather than trying to draw people away from other parties.  That would be particularly appropriate as there is concern about a low voter turnout.

But, as it turns out, this is not the case at all.  Netanyahu has referred to Ayelet Shaked as “the new Tzipi Livni,” which is lo yafeh, very unfortunate.  And I have learned that he is encouraging other members of Likud to do the same.  I would say that this is a mark of Shaked’s success.

The bottom line is that Netanyahu will be invited to try to form the next coalition if it appears that he has the best chance of doing so. Thus it is not the Likud strength, per se, but the strength of the entire right wing bloc that will be the determining factor.  Competing for votes within the right wing is not a productive strategy.

Recently, I shared a piece by Daniel Greenfield regarding the dynamics that have promoted the horrendous violence in the US.  Progressives are blaming this phenomenon, this scourge, on Trump, who allegedly encouraged a white nationalist mentality.

Greenfield’s analysis countered this interpretation by setting the problem into a broader context that focused on political developments that predate Trump’s presidency.  But in the end, as enlightening as it was, it provided only a political perspective.

I have since come across a number of commentaries with regard to this situation that offer a psychological/ social perspective. In very great measure they reflect a common point of view.

As this entire matter merits the urgent attention of all concerned Americans, I encourage you to keep reading here, and to give very serious thought to what is said.

I asked, above, “Can It Be?!” and I meant it in a positive sense.  But it also true here in the negative.  Hard to face, that it could be, but America is in deep, deep trouble

I begin with a video of Tucker Carlson on Fox News, who says blame for the violence is placed on Trump while the true crisis of America’s young men is being ignored.   Pain is being leveraged for political advantage, when in fact a long term social crisis, a social abyss, is at the heart of the problem.  There is, he says, a reluctance to face this reality.

People feel alone because there is a breakdown of social institutions.  Fewer people are in relationships. Drug use is up and suicide among young white males is at an all-time high.

“[The violence is] exactly what you get in a culture where anything goes and nothing matters.  Extract all the meaning and purpose of being here on earth and erase as many boundaries as you can from custom and behavior and watch what happens.

“No communities, no mentors, no initiations into personal responsibility, no daily organizing principle… no opportunity for love and affection.” 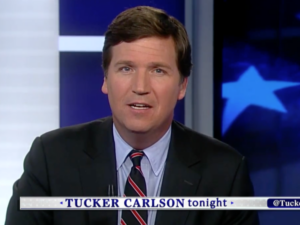 “Working class Americans,” he writes, “have had everything worthwhile taken away from them – and have been given consumerism and pure liberalism instead.”

What we are seeing, he says, is cultural collapse. With regard to this, he cites a number of parameters:

Shockingly, life expectancy is declining in America, so that “a Chinese child can hope to live longer and in better health than a white child in the United States.”

Suicide rates among white Americans increase every year and “the demographic group that drives up suicide rates is made up of whites without a university education.”

“Destroy the figure of the father, dissolve the family, deconstruct the school, deprive the human being of the religious dimension and throw him into a condition of pure consumerism without the ties that make us less vulnerable to evil and violence, foment a vulgarized and exhibitionist culture as a consequence of the ’60s with its Western collective guilt and an illegitimate and purely liberal society and you will have the America of the massacres.” 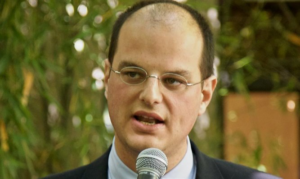