Today the new US Embassy in Jerusalem was dedicated and what a glorious day it has been.

I knew I would watch the entire proceedings, which were very ably presided over by Ambassador David Friedman. 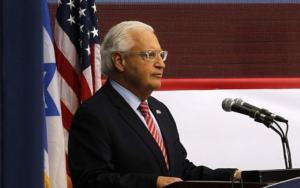 What I did not know was how beautiful it would be or how deeply moved I would be.

The event was warm, sincere, and celebratory.  It is obvious that we here in Israel are dealing with representatives of the United States – starting with Ambassador Friedman, but including Jared Kushner and Ivanka Trump, and others – who genuinely care about Israel.  You can see it in their faces and hear it in their words.

What an upper this is!
~~~~~~~~~~
I cannot recount to you the words of every speaker – I would not even try.  But I will touch on certain highlights.

Prime Minister Binyamin Netanyahu, who is an excellent speaker, did not disappoint. 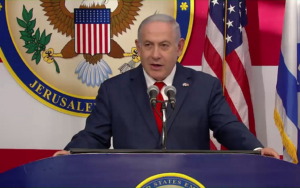 “Remember this moment,” he told us.  “This is history.”

He recalled his early childhood, when he lived not far away.  His mother warned him not to go past a certain point, and that point is where the Embassy now stands.  This was because it was at the line with Jordan, which then occupied eastern Jerusalem.  Even approaching it was dangerous.

He proceeded to speak about the Balfour Declaration and then the victory of the Six Day War, when the cry went out to the people, “Har Habayit b’yadenu”:  “The Temple Mount is in our hands.”

“We are here to stay!” he then declared. By this he clearly meant that we will never divide Jerusalem again.
~~~~~~~~~~
A clarification: A portion of the Embassy property is located on what was referred to prior to June 1967 as “No man’s land.” That was a strip of land that existed between Israel and Jordan when the 1949 armistice lines were drawn – it belonged to neither side.

Talk persists – even in the statement by President Trump today – about the fact that the US has not defined the final borders of Jerusalem.  This is meant as reassurance to the Palestinian Arabs that they might still secure eastern Jerusalem if they would negotiate.  “Western Jerusalem” – the only part of Jerusalem the PA ostensibly would acknowledge as being Israeli – is defined by the armistice line.  But the US is apparently willing to consider territory beyond that historical line as being part of Israel.

There are many who would disagree with this, including, as I understand it, the State Department. However, Prof. Eugene Kontorovich, the director of international law at the Kohelet Policy Forum in Jerusalem, maintains that by moving the embassy to its current location, the United States is recognizing Israel’s sovereignty over land it captured in the 1967 war:

“Much more important than what the State Department says, it is what their actions say,” Kontorovich said. “You don’t build an embassy in territory that is not sovereign to Israel.”

https://www.todayonline.com/world/new-us-embassy-jerusalem-may-lie-partly-outside-israel
~~~~~~~~~~
Netanyahu, most appropriately, expressed great gratitude to President Trump for having the courage to move the Embassy.

I believe we should all feel that gratitude.

An underlying theme of the event was the necessity to act for truth, if there is to be peace.  Peace, said our prime minister, cannot be founded on lies.

Friedman echoed this when he said:

“Make no mistake, today’s historic event is attributed to the vision, the courage and the moral clarity of one person to whom we owe an enormous and eternal debt of gratitude, President Trump.”

Every sovereign state has the right to select its own capital, we were reminded today, and that applies to Israel as much as any other state.  Justice on this score was long past due.
~~~~~~~~~~
A point made by President Trump, as well as by others, is that when Israel was founded, US President Truman was the first to recognize the new state.  A parallel was then drawn to the US being the first to move its embassy to Jerusalem, 70 years later. 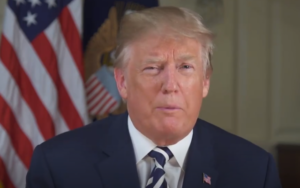 You can see a video of the president’s brief remarks here:

https://www.timesofisrael.com/in-video-at-jerusalem-embassy-opening-trump-stresses-commitment-to-peace/
~~~~~~~~~~
In those remarks, he speaks of his commitment to peace. I understand his desire to reach out to Arab nations, but cannot help but wonder if he is unprepared to embrace the truth of the situation – even as he lauds the necessity of facing truth in other contexts.  If he is referring to peace between Israel and Sunni Gulf states, his stance is understandable, even commendable, and certainly within the realm of possibility.

But with the Palestinian Arabs?

This observation is even more relevant with regard to the remarks of Jared Kushner, who, during his talk, spoke of his continuing belief that people can change and peace can happen.  He has been devoted to the “peace plan” with the PA, which is what he was obviously alluding to.

One has the impulse to say, “Come on, Jared, you have to realize this is not possible – the PA is not going to change its tune.”

I recently encountered a comment allegedly made by Kushner to Netanyahu:  They are afraid to release the “peace plan,” he is reported to have said, for fear the PA will reject it out of hand. So does this mean he does know it is not possible, and he is simply giving voice to his wishful thinking?  Or is he genuinely appealing to the Palestinian Arabs to change?
~~~~~~~~~~
Before leaving the topic of today’s Embassy dedication, I want to note the benediction of Pastor John Hagee, head of CUFI, the largest Christian Zionist organization in America.  He was passionate as he said, “Israel lives! Let the Islamic terrorists know this.”  “Israel lives!  Let Iran know this.” “Halleluyah!”
~~~~~~~~~~
Then, a bit of elucidation that I hope will be helpful. Working with two different calendars that do not coincide can cause confusion:

David Ben Gurion declared Israeli independence in 1948 on May 14th, according to the Gregorian calendar.  This was the fifth of Iyar on the Hebrew calendar, which is the date on which we celebrate Yom Ha’Atzmaut (Independence Day) every year.  This year, this Hebrew date fell on April 19th – we’ve had our official celebration.

But there are those who remember and mark May 14th as the day of Israeli independence.  That is today: It is 70 years ago to the day, according to the Gregorian calendar, that we became an independent state.

This year the date is special, because it also marks the opening of the US Embassy in Jerusalem.  The choice of this date by the Americans was made with this history in mind.  References to what Truman did 70 years ago were very specific: 70 years ago to the day.

Nakba means “catastrophe” in Arabic.  The day on which Israel declared independence is considered by the Palestinian Arabs to be a catastrophe.  Thus they mark “Nakba Day” every year.  Not as a day of mourning, but of violence.  For them May 15th every year is “Nakba Day.” Why it is one day after Israeli independence is not clear to me.

At any rate, in recognition of the moving of the embassy – perceived as an additional catastrophe – this year “Nakba Day” was observed on the 14th of May.

And how did they decide to observe it?  By promoting the most violent demonstrations possible at the Gaza fence.  The goal they broadcast widely was to have vast numbers of Gazans – 100,000 to 200,000 – at the fence, with some breaking through to massacre Israelis.

This was not a pretty picture, and in fact had distinctly ominous overtones. 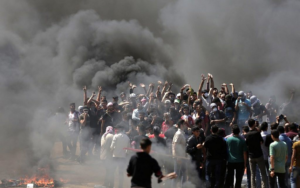 ~~~~~~~~~~
The IDF managed superbly, however, succeeding in the most significant goal of not letting them break through:

Thousands of notes were dropped in advance, advising Gazans to stay away from the fence, as they might be shot.  Whether this worked or there were other factors involved, the numbers never even approached 100,000.  From different sources I read estimates of from 35,000 to 50,000 dispersed over several stations in Gaza.

Before the mobs gathered, Israel went into Gaza with bulldozers and took down piles of earth that had been built up to shield rioters from IDF snipers.  The IDF also burned some of the tires that had been stockpiled.

Two battalions were stationed near the fence, empowered to shoot those who might break through.

An enormously powerful water cannon was brought near the fence, a weapon capable of pushing back mobs. I do not know if it was used.

Several Hamas sites inside of Gaza were bombed during the day.
~~~~~~~~~~
The IDF said that the violence in Gaza was “unprecedented.”  Hamas sent 12 “cells” to break through the fence at different points and kidnap soldiers. All their efforts failed.  Two teams of gunmen opened fire on the IDF and rioters hurled rocks and firebombs at the troops.

Roughly 50 people in Gaza have been killed and hundreds wounded in the course of the rioting. My response is that this is no more than they might expect, given their behavior and their stated intention of challenging our sovereignty and kidnapping and killing our people. It cannot and will not be tolerated.

It goes without saying that there will be charges leveled in certain quarters that Israel improperly killed “innocents.”

Incredibly, Hamas is still playing the same game: Khalil al-Hayya, a senior leader in Hamas declared, “We say clearly today to all the world that the peaceful march of our people lured the enemy into shedding more blood.”

Can anyone believe this given the evidence of the violence?

It seems to me that those who charge us with impropriety are demonstrating a blatant bias against Israel.  If they believe what Hamas says, it is because they want to believe it. And at this point, I shrug at such charges: we have no need to justify ourselves.

Clearly, Israeli security is also shrugging at criticism of the IDF actions.  A report that has just surfaced indicates that a message has been sent to Hamas via Egypt letting them know that Israel will resume assassinations of Hamas leaders if the violence continues.

Apparently, Egypt offered to open the Rafah crossing to the Sinai if Hamas stopped the violence, but this had no effect.

As I write, matters have quieted down for the night. But the IDF is prepared for violence again tomorrow.