The English translation—I am still alive!—doesn’t quite have the same impact.

It is Yom HaShoah here in Israel today: The Holocaust Martyrs and Heroes Remembrance Day.  Last night, the official ceremony was held at Yad VaShem.

Every year I write about this ceremony, and the stories of those survivors, accompanied by family members, who light the six torches for the six million. 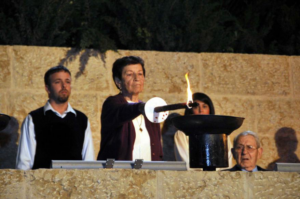 You can see pictures of the six for this year, with links to their stories, here:

http://www.yadvashem.org/yv/en/remembrance/2018/torchlighters.asp
~~~~~~~~~~
Every year I am overwhelmed by the stories of the incredible pain they endured, endured only because they are Jews. I recognize, and speak about, the necessity of remembering. For in every generation we face enemies. Remembering helps us to stay strong, and to know who we are.

Every year, I stand with Am Yisrael in silent meditation when the siren goes off at 10:00 AM. 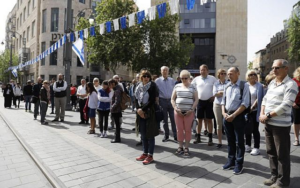 There is an organization called Koolulam that brings together diverse individuals to sing, because in singing they feel united.  For Yom Hashoah, they did something a bit different.  They brought together 600 people – Shoah survivors and their families – to sing “Chai!”  “I live.”  And oh, their faces, lit with hope in spite of the memories, and with love for their families.

Perhaps you, too, will find that tears are streaming down your face.

We are an extraordinary people.  We do not permit defeat: Going through the worst of times, we look forward.  And we build life.

The event was held in Beit Avi Chai, a cultural center in the heart of Jerusalem.  As Beit Avi executive director Dr. David Rozenson explained:

“By uniting in song, we celebrate not only the miracle of survival, but the next generations of those who have been born and who are, together, continuing the great miracle of the Jewish People in the Jewish State. We draw great hope and inspiration from them – and will never forget their strength and victory. The Jewish people are one nation that beats with one heart, and there is no greater expression of this than our unity.”
~~~~~~~~~~
We here in Israel genuinely understand the phrase “Never Again!”  It is not a slogan, but an expression of intent to protect and preserve Jewish life.  We are serious about this, and I firmly believe that our prime minister is tough in this regard. Tough, without hesitation.

This is relevant where the terrorist mobs at the fence with Gaza are concerned, and in Syria. We will do what needs to be done and we will get through it.
~~~~~~~~~~
In my last post, I described the harsh criticism of Syrian president Assad that was voiced here in Israel regarding the civilians, including children, who had been attacked with sarin nerve gas. The criticism was joined with a sense of the moral imperative to do something about the situation. That sense is born, in part, of our national experience in the Shoah.
~~~~~~~~~~
Monday night, a number of missiles hit the T4 military airbase in the Homs province of Syria. No one claimed credit for it, but it did not take long before it was clear that Israel was involved. The US was quick to say it had not done it, and the Russians expressed indignation that Israel had not informed them before the attack.

The T4 base had been hit by Israel when the Iranians launched the drone into Israeli airspace two months ago.  For a period of time thereafter, Iranians left the base, but they then returned.  It is on Syrian soil, but it is an Iranian base in point of fact.  A handful of Iranians were killed in this most recent attack, and Iran is clearly incensed.

Israel was careful to avoid damage to Russian personnel and equipment during the attack. It is possible that the Russians were not warned in advance, in spite of an understanding we have with them, out of concern that they would not keep the information to themselves. (My speculation.)

Netanyahu subsequently called Putin, who asked him not to do anything to “destabilize” Syria.  Something of a joke, when one considers the condition Syria is in.  Netanyahu was forthright in telling the Russian president Israel will not permit “an Iranian military entrenchment in Syria.”

https://www.timesofisrael.com/putin-asks-netanyahu-to-avoid-destabilizing-steps-in-syria/
~~~~~~~~~
On Monday, in the closest he came to public acknowledgment of our having done the bombing, Netanyahu said:

“We have one clear and simple rule and we seek to express it constantly: If someone tries to attack you – rise up and attack him.” (This is a Talmudic admonition.) 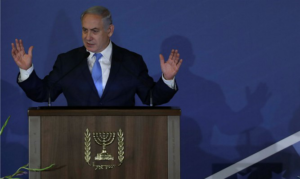