From Israel: And Now??

This will be a “catch-up” posting to keep my readers in the loop during a process with regard to Hamas that is still unfolding.

During the night on Wednesday, two rockets were launched from Gaza. Hamas later said their people did not launch them.  But the IDF rejected this out of hand: The rockets were Grad rockets, a powerful weapon in the possession of Hamas in Gaza and none of the other factions.

One rocket destroyed a house in Be’ersheva. 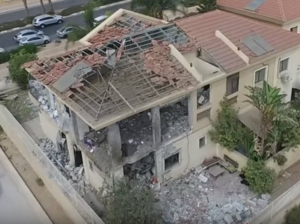 A woman and her two children lived there.  They had just entered their bomb shelter when the rocket hit. Hysterical at how razor-sharp close they had come to disaster, they had to be treated for shock.

The other rocket was aimed towards Tel Aviv but missed its mark and I believe landed in the sea.
~~~~~~~~~~
This represented a major escalation from Hamas and generated a great deal of anger in Israel; Defense Minister Lieberman was especially incensed.

In response, the IDF hit 20 Hamas targets across Gaza; according to IDF spokesman Ronen Manelis, these included an attack tunnel, a Hamas base, and a rocket manufacturing site. In one instance, a group was struck as it was attempting to launch another rocket.

https://www.haaretz.com/israel-news/.premium-one-rocket-launched-from-gaza-hits-southern-israeli-town-of-be-er-sheva-1.6569091
~~~~~~~~~~
During the day yesterday, there was still talk about last minute efforts by Egypt to redeem the situation before it was too late.

A Security Cabinet meeting was delayed until very late because IDF Chief of Staff Gadi Eisenkot was in the US and had to return home.  In preparation for that Cabinet meeting, Prime Minister Netanyahu held meetings with officers of the Gaza Division (pictured) and other military personnel, as well as with heads of municipalities and regional councils in the area adjacent to Gaza. 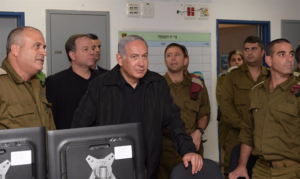 As time for the meeting approached, there were reports that it was Lieberman’s intention to seek approval of the Cabinet for a military action in Gaza, and so many of us went to sleep expecting to awake to news of war.
~~~~~~~~~~
This morning, however, all was quiet.  Everything was even ordered back to normal in the southern communities. For a short interval of time it was so quiet that I thought that this might be a ploy: that a decision might have been made to reveal nothing to the press, and to then attack.

But slowly, the leaks and comments began coming through:  The Cabinet, it appears, opted for the position of Gadi Eisenkot (at left below, with Netanyahu and Lieberman), who recommended that the IDF respond according to what happens on the ground and not pro-actively. 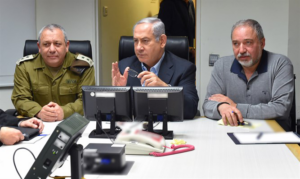 “I will not refer to the content of the cabinet discussions, but I can say one thing very explicitly – the rules of the game are about to change.

“We will no longer accept the arson terror and the fence terror.”

Reportedly, the Cabinet has instructed the IDF to demonstrate a zero tolerance to violence at the fence, gradually intensifying the reaction to that violence.

I am unable to be more specific as to what this means. Shooting any adult who launches an incendiary device?  Killing anyone who tears down the fence and enters Israel? I do not know.

It has not been specifically mentioned here, but I wonder about burning tires that spread toxic fumes into Israel communities adjacent to Gaza. Will that continue to be tolerated?

What I do know is that leaders in the communities adjacent to Gaza are not happy that the recommendation of Lieberman was not accepted. And that Netanyahu has said if the violence continues we will “react with great force.”

The first test comes tomorrow, as the big day for rioting at the fence is Friday.

You know what they do? They pray in the morning (it is their Sabbath), and riot in the afternoon and evening.
~~~~~~~~~~
Late this afternoon, a contingent of 60 tanks and armored personnel carriers, clearly visible from the main roads, were deployed along the Gaza fence.  This is the largest deployment that has been observed since the Israeli-Hamas war in 2014. 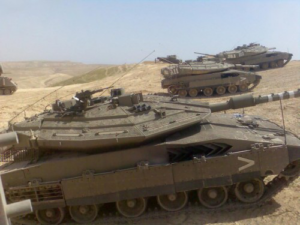 ~~~~~~~~~~
IF zero tolerance is actually exhibited, and IF Hamas knows we really mean business, then it is possible some measure of deterrence might be regained, and the violence might be contained for an interim of time.
~~~~~~~~~~
My first response to this is:

What the hell took so long?  Why was there not a zero tolerance policy from the moment of the first violent confrontations at the fence six months ago??

Had there been an appropriately tough response from the beginning, we would not be contending with the current situation.

I have had direct communication with a soldier who just finished serving at the Gaza fence. I have heard first-hand about the frustration of the troops stationed there, and about the restrictive rules.

My contact told me that the soldiers were often afraid to shoot because they might get in trouble for having done it the wrong way.  Afraid?  These are loyal soldiers, facing down violent, Israel-hating creeps, and trying to follow the rules. The situation has undermined their morale.
~~~~~~~~~~
And while our guys were being careful, those violent, Israel-hating creeps, supported by Hamas, have been sending incendiary devices into Israeli territory.

This report came out recently:

“Over the past six months, since the outbreak of the arson attacks in the south, more than 1,100 fires have been caused in the forests of the Keren Kayemet Leyisrael Jewish National Fund, according to a just-released KKL-JNF report.

“The fires have covered about 12,000 dunams (3,000 acres) of natural woodlands and planted forests, more than half of the KKL-JNF forests in the Gaza perimeter.”

I have been weeping inside about this for a long time, and I do not understand how it was permitted for so long!!
~~~~~~~~~~
Hopefully, the situation is about to change.
~~~~~~~~~~
One last comment: There is still talk about the possibility of a “long term truce.”  I don’t believe it is possible.  Lieberman indicated this week that every effort failed.

More importantly, I absolutely do not believe that it should be given a chance to succeed.  Who has ever heard of a ceasefire with a time limit?  This is the Muslim version of a ceasefire, a hudna, modelled after the behavior of Mohammad.

When there was talk of going to war now, Lieberman warned that it would be harder this time, because Hamas has better weapons.  Should we then allow them to continue to increase the quality of their weapons, unhindered, for a period of years?  Or until they decide they are strong enough to attack us?

We must have the latitude to move as we deem necessary without being accused of “breaking” a truce.  Zero tolerance is for the short term. Ultimately, it is going to be necessary to do a military action of a more extensive nature to, at the very least, diminish Hamas capabilities.
~~~~~~~~~~
And so we must pray.  For the wisdom and courage of our leaders. For our own courage in hard times.  And ultimately, for peace.
~~~~~~~~~~