From Israel: An Unholy and Ugly Mess

The status quo with Hamas is intolerable and dangerous.  That is the given.

But we continue to operate on the cusp of war without reaching that war. Solutions are not simple and clear-cut (even as some assume they are): The way is strewn with complexities.

What is required of our political leaders is the courage to make some hard decisions in order to move us to greater clarity of action.
~~~~~~~~~~
At various levels, a number of nations and entities have gotten involved, and are attempting to put band aids on a situation that is festering and septic.  Everyone wants to get into the act, assuming that it may yet be possible to bring about a long term “ceasefire” and then to improve the humanitarian situation in Gaza, which, they wrongly believe, will moderate Hamas.  A war works against their goals, and Israel’s long-term security concerns are of absolutely no interest to them.

“Everyone” includes the EU, and the UN, Turkey, and Qatar – a devious and motley crew, none of whom we can afford to give a damn about.

Then there is Egypt, with which we do work cooperatively on various issues – al-Sisi in fact despises Hamas and is leaning on the terrorists (which is likely what caused the cessation of rocket fire late last week).

But pressure not to hit Hamas hard is also apparently coming from the US. This makes matters more difficult.

In the end, however, Israel must do what is good for Israel.  This is a lesson we should have learned long ago.
~~~~~~~~~~
Hamas claims that with the cessation of rockets last Thursday, an Egyptian-mediated “ceasefire” had come into effect.

Israel vehemently denies this, saying only that “quiet will be met with quiet.” What this suggests is that, while there is no agreement, as long as Hamas does not launch rockets we will not either.  That is what the Security Cabinet meant when it gave instructions to “continue to act forcefully” against Hamas violence.

As I wrote last, this is not a tenable position: this puts Hamas in control, with Israel simply being reactive.  It weakens us.

The fact that we stopped launching rockets last Thursday when Hamas did suggests that – while we formally agreed to nothing (signed nothing) – we informally were on board for that “quiet.”  There is considerable criticism of this because we stopped attacking prematurely, before certain goals, such as the return of the soldiers’ bodies and the two Israeli civilians, had been achieved.
~~~~~~~~~~
The primary goal would have been an assurance of quiet in the south.

This, however, is the “quiet” that met us this past Friday and Saturday: 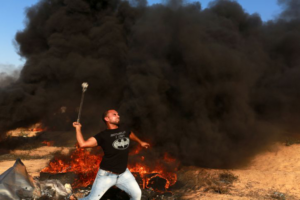 They were back at the fence, nine-thousand strong, scattered over five locations. Rioters threw firebombs and Molotov cocktails at IDF forces, and in one instance a grenade.  There were several attempts to break through the fence.

So how did we respond? We shelled two Hamas positions from a tank.
~~~~~~~~~~
Additionally, incendiary devices were launched.  A HUGE kite landed on the power lines of a kibbutz, causing an outage. 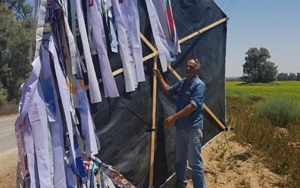 Another device fell right next to a communal dining room yesterday and today one landed in a kibbutz avocado field and another in the Be’eri Forest.

In response we fired at the launching cells.
~~~~~~~~~~
The situation cannot, must not, continue this way.

Having stopped when we did, were we to launch rockets at Hamas now, we would be accused of “breaking a ceasefire.”  As I seek to provide a posting with a professional tone, I will not share here what my response to this would be.

The residents of the south are clamoring for serious military action against Hamas.  And some leaders are speaking out.

“There’s no ceasefire.  To our great dismay, this hasn’t ended, it’s barely started. It’s time to finish it. The diplomatic echelon needs to give the order, and the IDF will do the work.

“The Cabinet needs to tell the military echelon to bring Hamas to its knees. There needs to be defeat, not acceptance.”

~~~~~~~~~~
Prime Minister Netanyahu hedges it, however:  We will not accept anything less than a full ceasefire, he says, meaning, of course, that incendiary devices and firebombs do not constitute a “full ceasefire.”

But it is very unlikely that we will get a “full ceasefire.” And so?

“I will not reveal our operational plans here; they are ready. Our objective is to restore the quiet to residents of the south and the area adjacent to the Gaza Strip. This goal will be achieved in full.”

What will it take to make Netanyahu decide to actually activate those undefined “operational plans”?  This is not rhetorical – it is a question of major import.
~~~~~~~~~~
What seems to me most important is that we take action that is offensive in nature: that we attack.

Several people, including some military figures, believe that targeted assassinations would be the way to go.  Brig. Gen. (res.) Zvika Fogel, former head of the Southern Command, suggested the other day that it was not necessary to have a full scale war to achieve a decisive victory (emphasis added):

“The IDF and the Shin Bet have excellent intelligence. They know exactly where each of the Hamas commanders sleeps. And what we have to do is have the courage to go in and do it and then leave.

“We are a sovereign state, and a group that has not yet succeeded in establishing a state of its own is managing our daily routine for our citizens…I tell you – the IDF knows how to do these tasks, it has to get an order and execute them.” 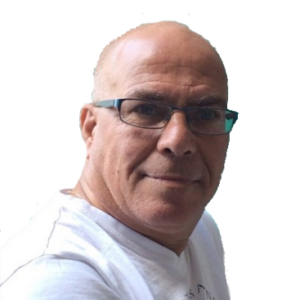 ~~~~~~~~~~
On the other hand, Energy Minister Yuval Steinitz (Likud), a member of the Security Cabinet, today said that “Toppling Hamas is an option, and we are closer to it than ever.”

But why talk about it?  Haven’t we heard this before?

There are other sources indicating a desire to wait until the end of 2019, when a barrier above and below ground along the entire Gaza border will be completed, before initiating a large scale military operation.
~~~~~~~~~~
If you find yourselves confused by all of this, it is not because you are missing anything: Rather, it is because there is not yet resolution on this very difficult situation.
~~~~~~~~~~
There is one other factor in play that merits mention here.

If fighting is necessary to protect the country, there is no wisdom in avoiding war.  Were we to always shy from war here in the Middle East, we would be doomed. In fact, once a decision to go to war is arrived at, it should not be waged half-heartedly, for hesitation undermines.

Our troops have been well trained to go into Gaza.  If it is necessary they can do it splendidly, and would be victorious in the end.  Let no one think otherwise.

I am often blown away by the readiness of our young soldiers to do their part for the country.  There is a social contract: they may die to protect our nation, and they accept this.
~~~~~~~~~~
But our army is a citizens’ army, and these young soldiers of 18 and 20 are our sons and grandsons, our brothers and our nephews. We are never at a remove from what happens to them.  We are a small country and each of these soldiers belongs to all of us.  We take their deaths to heart. 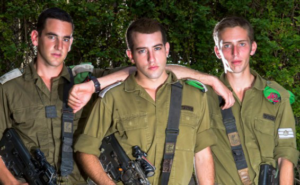 It is important, then, to strike a balance between taking action to protect the nation – bold and determined action as necessary – and not moving in a direction that excessively risks the lives of our young soldiers.

This is not often spoken of, but this reality stares us in the face at every moment.
~~~~~~~~~~
Perhaps going into Gaza now to take down Hamas IS a good idea, and important for the security of the nation.  Certainly these terrorists, who represent a consummate evil and a threat, deserve to be taken down.

But we need to recognize that the human cost would be high in the tight urban spaces of Gaza City, beneath which lies a network of miles of tunnels.  Some of those who advocate war in Gaza make it sound easy. It would not be easy.

Perhaps there are other ways – wise and creative ways – to manage the situation now for our country without taking on this level of risk to our soldiers.

I have mentioned just a couple of them, and there are more.  There was, for example, the suggestion that the elite neighborhoods of Gaza City, which is where the leaders live, be bombed intensively for a few days.

Perhaps.  Perhaps.  It may be that our decision makers have trouble wrapping their heads around this, which is why we sense such confusion.
~~~~~~~~~~
I have read that Prime Minister Netanyahu will not do a major military operation in Gaza unless he is certain that the country would be supportive of this. I would not necessarily view this as a weakness or political maneuvering.  Built into his hesitancy may be sensitivity to the human dimensions of war; the decision is a heavy burden.