From Israel: Almost at War?

When I got up on Thursday morning, I thought it very likely there would be news of a war in Gaza.  But there was not. Nor is there today, as I write.
~~~~~~~~~~
The IDF has been shooting near those terrorists who launch incendiary devices as a “warning,” but is not actually shooting them.

While the Security Cabinet wanted to see the IDF take a tough stance, there has remained disagreement within the military regarding the advisability of doing so.  There is worry, as I understand it, about accusations that we are shooting “children,” because some of the launchers – not all by any means – are young. 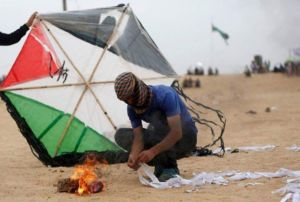 I – along with a great many others – grieve this tendency to watch the reaction of the international community rather than making decisions based on what is right for Israel from a security/military basis.

This stance weakens us.
~~~~~~~~~~
Instead of taking out the launchers, the IDF started hitting Hamas sites and infrastructure in Gaza, because Hamas is responsible for those launchers.

But then, on Tuesday through the night there was once again a barrage of rockets and mortars – some 45 in all – launched from Gaza.  This time Hamas announced that every time the IDF hit in Gaza they would launch more rockets.

It would certainly seem that Hamas took this position with reasonable confidence that Israel was not going to go to war.
~~~~~~~~~~
This became something of a wake-up call.

At a graduation ceremony for new army officers on Wednesday, Chief of Staff Lt. Gen. Gadi Eisenkot spoke about restoring peace to the south.  “I’m convinced we will achieve this with wisdom, determination and soon.”

While Prime Minister Netanyahu declared that Israel’s response would escalate “as necessary…  Israel is “prepared for every scenario, and it would be good for our enemies to understand this – now.”

And Defense Minister Lieberman said that “…for what happened yesterday, I have only (four) words for Hamas: It was a mistake.”

Israel did go into Gaza again on Wednesday and retaliated by hitting 25 terrorist targets.
~~~~~~~~~~
Here I pause to make some observations.  I am receiving comments from some of my readers regarding the need to go into Gaza and take it over entirely.  I do not believe this is going to happen, in fact, I am reasonably certain this is not going to happen – as much as many of us long to see it happen (in the right circumstances).

That is because what I had previously written with regard to this situation still stands:

[] There remains a very real concern about becoming so thoroughly immersed in a major conflict in Gaza that we would be weakened/distracted were Hezbollah to hit us.  Taking out Hamas in Gaza would require a very substantial military action.

[] Unless we were prepared to remain in Gaza, were we to take out Hamas, there would be the likelihood of a takeover by ISIS, which is waiting in the Sinai for just such an eventuality.

That said, I believe there are military actions of a substantial nature that would (please forgive this pun, I could not resist!) take the wind out of Hamas’s sails.

There is a desire to finish the job once and for all.  In fact, when Lieberman became Minister of Defense he declared that if we went to war against Hamas again, we would finish them. But if now is not to time to accomplish this, does not mean we should do nothing.

Hamas might be struck sufficiently to bring quiet to Israel’s south.  (At present, I will note, no Hamas leaders or personnel are being hit, only empty sites.) Or there may be some other creative way of handling the situation militarily that would have the same effect.

And I believe that Hamas should have been given the understanding from the beginning that while we are not seeking war, we are prepared for it and ready to launch it.
~~~~~~~~~~
I want to share two very short videos here, both about two weeks old.  They provide a clearer picture of what is being done to the south of Israel.  It is cause for mourning, and great rage.

One shows the scorched land.  The second details loss of farming produce.

This has gone on for too long and cannot continue.
~~~~~~~~~~
I note as well here a video that teaches Gaza teenagers how to make incendiary balloons out of condoms.  Yup, you got it.  Surreal and ugly.

http://www.jewishpress.com/news/eye-on-palestine/palestinian-authority/watch-terrorist-video-teaches-how-to-make-a-balloon-bomb/2018/06/21/
~~~~~~~~~~
On Thursday, there were 15 new fires started in the south.

Public Security Minister Gilad Erdan has now said that there is “a very, very high chance” that “there will be no choice and in the coming months we will have to enter a widespread operation in the Gaza Strip.” 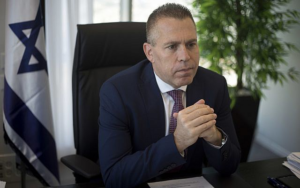 It is difficult to imagine that it will take months.
~~~~~~~~~~
Suffice it to say that my best information – very non-specific – is that indeed we can expect an operation of some sort before too long.

I am reading that Hamas may be seeking some sort of ceasefire deal, and this we absolutely should not do.  Their ceasefire is a “hudna,” which means they are buying time to hit us harder later.
~~~~~~~~~~
Before leaving the subject of Hamas, I want to share this:

Some weeks ago, a baby that had been brought to the fence in Gaza died.  Accusations were made that it was Israeli tear gas that killed her, although there was information about a condition the child had.

Now we have learned that Hamas paid the family 8,000 shekel (over $2,000) to say that it was Israeli tear gas that killed her. Turns out she died of a fatal blood condition that runs in the family.

Please, share this further.
~~~~~~~~~~
My situation is in flux now – as I am entering “kaitana savta” time. This is “grandma camp,” when some of my grandchildren, bless every one of them, come to stay, a couple at a time.  We always have a lot of fun, whether it is eating pizza and ice cream or doing a special outing.

When they are here, my attention is diverted from my writing, as well it should be.

I will do my best to follow events in the coming days, but trust that my readers will understand if I may be a tad slower than normal in responding to various situations.

There is a great deal to look at, such as the progress of the “peace process.”  Envoys Kushner and Greenblatt have visited leaders in Egypt, Jordan, Saudi Arabia and Qatar, and are now in Israel.
~~~~~~~~~