From Israel: “A Wretched State of Affairs!!”

It did not have to be this way, but it is.  Israel is headed to the third election in less than a year.

I point a finger of accusation, first, at Avigdor Lieberman, head of Yisrael Beitenu.

He fomented the electoral instability and took some perverse satisfaction in refusing to rescue the situation when he could have.

And then at Yair Lapid, who is head of Yesh Atid and co-chair of the Blue & White party.  He blocked Gantz’s efforts to successfully negotiate a unity government with Netanyahu.

The horrendous “anyone but Bibi” tone of the political maneuverings—that did not focus on the issues—also stands accused, along with a reluctance to treat the indicted prime minister (if in fact he has actually been officially indicted at this point, when there is no standing Knesset House Committee) as innocent until he might be proved otherwise. Add to this a shameful anti-religious stance on the part of the spoilers.

As of midnight tonight, Wednesday, the Knesset, by vote, officially disbanded itself because no governing coalition has been established and we’ve reached the legal deadline.  Elections are set for March 2, although there seems to be some question about that date.

Netanyahu has agreed to Likud primaries on December 26, and Gideon Sa’ar is revving up for this with considerable energy.  Netanyahu remains the favorite.  It is my understanding that there is likely to be some restructuring of the power sharing arrangement between Gantz and Lapid, as well as some other changes in party arrangements on the right.

I know of no one – perhaps discounting Lieberman and Lapid – who is happy about this situation.  People are very heavy-hearted, and worried.

When something of import with regard to the elections happens or is likely to happen, I will be at my computer writing about it – rest assured.

However, in the coming weeks, I hope my discussion of the impending elections will not be the major focus of my writing.  Been there, done that. At this point there is so much conjecture and rumor that it becomes a waste of our time to pay undue or premature attention to it.  It drains us.

I would like to focus on various matters that are informative, enlightening, and uplifting.  And yes, sometimes alarming, because we cannot run away.

One bright light in this mess is that it allows Naftali Bennett to continue in his role as interim Minister of Defense. He is doing an excellent job, having come into his own – surprising and pleasing many.

“According to a Makor Rishon report, Bennett said that the defense system intends to destroy all illegal construction in areas under complete Israeli control, including that which Europeans funded…

“Attending the meeting were representatives from Germany, France, Italy, Holland, and Denmark.”

Right on!  It’s about time.  If he does this, it’s a big deal. The EU has been openly defiant.

A recent news report shines a light on the duplicity of the Europeans, who maintain different standards for Israel and the rest of the world:

The European Council on Foreign Relations (ECFR), an influential think tank closely affiliated with the EU, vigorously promotes the boycotting of Israeli territory beyond the Green Line, and has encouraged the labeling of products that come from Judea and Samaria, eastern Jerusalem and the Golan Heights. This group even called for sanctions on Israeli banks that do business in Judea and Samaria – a policy that has been rejected by the EU.

HOWEVER, research from the Kohelet Policy Forum, here in Israel, has disclosed the fact that ECFR receives significant funds from international corporations that do major business in the occupied territories of Western Sahara and Northern Cyprus.  The think tank shows no indication of rejecting the donations from these corporations, even though they do exactly the sort of business that ECFR has called on the EU to act against here in Israel.

This behavior, unfortunately, is not surprising – but it’s important to expose it.

I do not see the name of Law Professor Eugene Kontorovich mentioned in this brief report, but I recognize his thinking.  He is head of Kohelet’s international law department and this is how he often operates in defending Israel: By pointing out the disparity between how the world responds with regard to Israel and in other similar situations.  It’s quite effective in exposing duplicity. 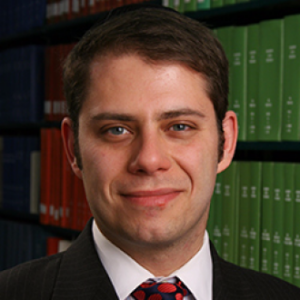 Here I provide additional information that supports the thesis from my last posting: that a “two state solution” does not exist.

“[Murad] Shtewi emphasized that the Palestinian people will not relinquish a grain of soil from the land of historical Palestine from the [Mediterranean] Sea to the [Jordan] River, despite the American administration’s attempts to allow the occupation state to expand the settlement and legitimize it, and he demanded that our people carry out a popular revolution against the occupation everywhere.”

“Our God has honored us and placed us in this land to stand against the invaders and the oppressors. The Tatars, the Mongols, the Crusaders, and the British have left, and these [Israelis] will leave, they will leave [too]. We are carrying out Ribat [religious conflict over land claimed to be Islamic] in this land. We in the Fatah Movement… today we are at the beginning of an ongoing confrontation, and are not making do with a rally or procession.” 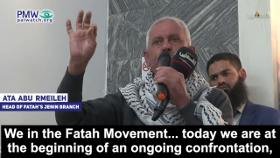 The citations above are from Palestinian Media Watch; PMW has added the emphasis. See the site for additional information: https://palwatch.org/page/17010

This is the true voice of the PA and its controlling faction, Fatah — our “peace partners.” These declarations are made in Arabic, for Palestinian Arab consumption, and have a markedly different tone from what is said in English for the international community.

Once again, please save this information, share it, and utilize it in making the case against the “two state solution.”

Last time I wrote, I described those advancing this “solution” as delusional.  But let me be more direct:

It takes unmitigated gall for the EU or the House of Representatives or any other official body to endorse formation at Israel’s border of a state for those who deny our rights and are on record as intending to destroy us.

I’ve been making the point fairly consistently that Israel should not be measured by an electoral process that is currently maddening:  We have so much to be proud of in other spheres.

Here I want to write about a source of very special pride: The Shalva Band.

Shalva is an award-winning Israeli NGO that supports and empowers individuals – from infancy through young adulthood – who confront a wide range of disabilities.

The Shalva Band began in 2005 as a unique outlet for talented Shalva program participants, inspiring them to reach their full potential and achieve a sense of dignity.  It has developed into a model for cultural inclusion. Most recently the band members have become emissaries for the State of Israel in various venues.

These eight talented musicians – each struggling with his or her own challenge, from blindness to Downs Syndrome – make great music together. They mesmerize their audiences.

This past Saturday night, the Band made its American debut at an event of the American-Israeli Council.  They were introduced by President Trump who remained on stage throughout their performance.  The president was marvelous, and very genuine, in his response to them after they performed.

See that performance, and his response, here: 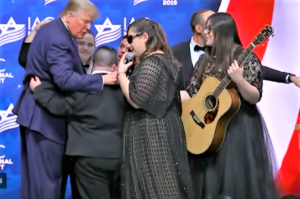 And speaking of Trump, he is about to sign an executive order recognizing Jewish university students as a class protected from discrimination.

Effectively the order will recognize Jews as an ethnic minority and not exclusively as a religious group.  Under the order, colleges that do not address anti-Semitism may lose out on federal funding.

I just said “Right on!” about Bennett’s action and say it again here.

Anti-Semitism – overt or in the guise of anti-Zionism – is horrific on US college campuses. I have not given it the attention I would like to because of focus on the political situation here. What this executive order will do, by recognizing Jews as an ethnic minority, is undercut the fallacious argument of people who say they have nothing against Jews, they just object to Israel.

It is time—past time—for every single one of us to be alarmed: I mention anti-Semitism above in the context of college campuses in the US. But it’s ubiquitous and growing:

[] In Paris, yesterday (Tuesday), a young Israeli exchange student was on a Metro train and sent a voice message to his father by WhatsApp. When two individuals of African origin who were on the train heard the Hebrew, they attacked him brutally – so badly that he almost lost consciousness. 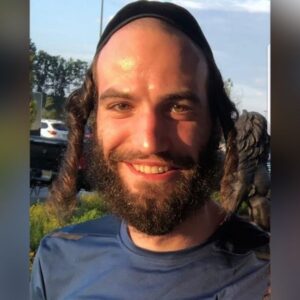 The attack was planned and there was clear anti-Semitic intent to enter the store and kill people within.  It took an hour shoot-out with the police before the two shooters were killed.  A stolen van used by the terrorists and parked in front of the store was found to contain explosives. Had the police not taken them down, it is clear they would have taken further lives. At least one of the shooters was later identified as a former Black Israelite who had expressed anti-Semitic sentiments.

Officials who made statements spoke of the atmosphere of hate that has arisen in America.

Dov Hikind (pictured), for many years a NY State assemblyman, is founder of Americans Against Anti-Semitism.  After the attack yesterday, a representative of this organization went to Jersey City to learn what was happening.  What he discovered was virulent anti-Semitism expressed by people gathered in the street. 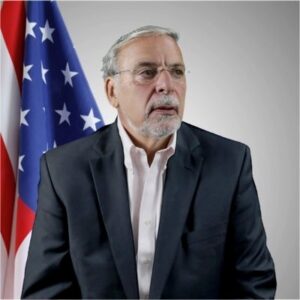 “The big story here is that not only was there a horrible terror attack motivated by antisemitism that occurred, but it happened in a context in which wishing death on Jews seems totally normal,” said Hikind.

“Not only was there a terror attack to absorb at the scene, which would be enough for anyone to deal with, our representative had to deal with vile anti-Semitic vitriol from local residents who wished the Jews were dead and gone. Let that sink in.

“What this clearly shows is that antisemitism is a MUCH BIGGER problem than anyone has hitherto imagined!”  (Emphasis added)

It is time for us to get our act together. A strong and united Israel is badly needed.