From Israel: A New Day

After listening to the speech President Trump delivered to a joint session of Congress last Tuesday night, I came to the conclusion, with gladness in my heart, that he has the potential to be – not merely a good – but an excellent president.  One who will repair America on a variety of fronts: as he says “Make America great again.”

That I am an Israeli by choice does not detract from the fact that I was born and raised in the US and remain an American citizen.  For the last eight years I grieved about what Obama was doing to bring America low (by design, I am quite certain).  I had thought that America was finished, but now see that this is not so. America was trembling at the precipice. Today Trump offers hope, and the possibility of correcting the wrongs (emerging from a far left ideology) of the Obama administration.

Delivering his talk with a reasoned, presidential demeanor, he looked at a host of issues. I will touch on some of the major ones here. Details of how he will address many of America’s ills, of course, have yet to unfold.  The point here is that he recognizes the problems and the need for remedy:

[] Strengthening the military. This is hugely important. The military had been obscenely weakened under Obama.  Trump has now said (emphasis added):

“Our allies will find that America is once again ready to lead.

Welcome, welcome words for those of us who are keenly aware of how Obama’s policy shifted the power dynamic in the world, giving strength to the bad guys.

[] Empowering students—especially inner city students.  The system has failed them and Trump is promoting school choice.

[] Remedying economic ills in the nation.  This would come via tax cuts, bringing manufacturing back to the shores of the US (remember “Made in America”?), cutting excessive regulations that strangle businesses, reducing the national debt, and a great deal more.

[] Restoring law and order to the land. An essential disrespect for those who enforce the law has become commonplace in America, particularly in the inner cities.  This will also require taking on criminal cartels, and drug dealers.  In some instances it is linked to issues of open borders (about which more below). 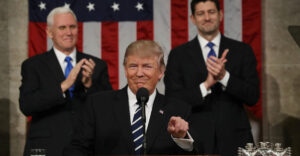 Of all of the issues that the president seeks to address, none has been more divisive than that of limiting immigration into the US.  It has, in fact, generated a measure of hysteria among leftists who believe in bleeding heart fashion that America has a moral obligation to open its doors to anyone who seeks entry.

President Trump, in his speech, spoke of the risks that are entailed in doing this.  Primary among them is the danger of allowing in radical Islamist terrorists who pretend to be refugees.  “According to data provided by the Department of Justice, the vast majority of individuals convicted for terrorism-related offenses since 9/11 came here from outside of our country.”  Let no one today make light of this, or pretend that there are not regions from which such radical terrorists are most likely to come. “It is not compassionate, but reckless, to allow uncontrolled entry from places where proper vetting cannot occur.”

There are additionally a host of other undesirables whose entry should be blocked or limited: members of drug cartels and crime rings.

It is particularly distressful to me that many American Jews embrace the notion that they have an obligation to support open borders now because Jews were not rescued during the Holocaust.  The thinking on this is distorted – there is an attempt to draw a parallel where one does not exist.

The Jews seeking refuge during the Holocaust period sought only to be saved.  The Nazi machine was after them mercilessly. They were a threat to no one, as they had no intention of subverting a host nation. Quite the contrary, they were eager to contribute to their new nation.  Actually, Jewish law says the laws of a nation in which a Jew lives must be obeyed. And those Jews who came into America became loyal and devoted citizens – proud, contributing Americans.

While there are certainly Muslims who are also eager to be proud, contributing Americans – and should be embraced as such, this is not the case across the board.  It is not Islamophobia to say so, it is simple truth.  A good number of those Muslims who are in America, or who seek to be in America, embrace Shari’a – Islamic law, which is not compatible with American values. That is their right, as far as it goes. But they also believe it is their obligation to impose Shari’a on everyone.

A study done by the very reputable Center for Security Policy in 2015 showed that one-quarter of the Muslims in America believe that violent jihad is justified in establishing Shari’a.

In Islam it’s called Hijrah, or jihad by emigration: To emigrate in the cause of Allah – to move to a new land in order to bring Islam (and ultimately the imposition of Shari’a) there – is considered a praiseworthy act.  That there is a humanitarian crisis is indisputable. But how to differentiate between those who are genuine refugees and those practicing Hijrah?

“The second choice has been America’s choice throughout most of its history, and it has been uniquely successful in shaping people from all over the world and from every background into one nation known as Americans. One of America’s three fundamental principles has been e pluribus unum, or “out of many, one”…And that is precisely what America has done.

“But since the 1960s, the left has supplanted e pluribus unum and its national American identity with the antithetical doctrines of diversity and multiculturalism.

“Diversity and multiculturalism celebrate the national/ethnic identities of the nations from where American immigrants came instead of celebrating the American identity and traditional American values.

“The result is the beginning of the end of the United States as we have known it since its inception.

“The left constantly repeats ‘we are a nation of immigrants’ without citing the other half of that fact — ‘who assimilate into America.’ The left mocks the once-universally held American belief in the melting pot. But the melting pot is the only way for a country composed of immigrants to build a cohesive society…

“If America becomes a nation of non-assimilating immigrants, or a nation consisting of non-assimilating ethnic, racial and national groups who are already here, it will cease being a glorious idea and become just another nation torn by conflicting interest groups. These various groups will fight one another — first verbally and then, perhaps, violently (and America will see more and more violence) — just as France, Sweden and Germany have seen since they began taking in millions of immigrants, many of whom have no intention of becoming Frenchmen, Swedes or Germans.” 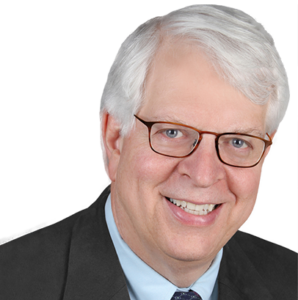 I believe that it is because Trump loves America that he wants to prevent this from happening.  This does not mean there should be no concern for those struggling and at risk in places such as Syria.  Not at all!  But there are other ways of helping them: sending in relief supplies, providing them with safe havens where they are, etc.

In the next few days the US government will be issuing new guidelines on immigrant processing.

One of the biggest obstacles President Trump faces as he moves forward is the subversion of those determined to undermine him and bring him to failure.  If you agree with my assessment, that he offers America a new hope, then I would suggest you not remain silent. Speak out on his behalf, and help give him the chance to prove himself.

The word is out that Senator Menendez (D-NJ) who is on the Senate Foreign Relations Committee is likely to support David Friedman for the position of US Ambassador to Israel.  A very good sign.

A fact-finding Congressional delegation is here in Israel to consider the implications – logistical and political – of moving the US Embassy to Jerusalem.

Ron DeSantis (R-Florida), who is Chairman of the House Subcommittee on National Security and a member of the delegation, said at a press conference on Sunday evening that President Trump intends to stand by his campaign pledge to move the embassy.

The EU, still trapped in its vision of a “two state solution” as the only possible solution to the Israeli-Palestinian Arab conflict, is not very happy with the current turn of events.

And so, foreign diplomats from the European states are considering high level talks with Israel.  Said one official: it won’t be “business as usual. Things have to be said very clearly to the Israelis.”

Somehow I doubt that those “high level talks” will affect Israeli policy even an iota.

I wonder what the EU diplomats would say about this report:

The (Palestinian Arab) Jerusalem Media and Communications Centre has released a new poll  It is based on a random sample of 1199 people over the age of 18 interviewed face-to-face throughout PA areas of Judea and Samaria (which they call the West Bank) and the Gaza Strip, in February 2017.

What does this tell us about the alleged desire of the people for a “Palestinian state”?  I would suggest that the EU wants it more than the people do. But this would never stop the EU from continuing to promote it. They know best.

An appeal has been filed on behalf of Elor Azariya, contesting his conviction on manslaughter charges. He will not begin serving his 18 month sentence until the appeal hearing is completed.

After the appeal was filed, three of Azariya’s lawyers quit.  This appears to be because they were opposed to filing the appeal – believing it put Azariya at additional legal risk.  For in this proceeding, the prosecution can seek a stiffer sentence.  Apparently the lawyers were in favoring of forgoing the appeal and seeking a pardon.  Elor’s father, Charlie, however, is opposed to this, saying that it was important to clear Elor’s name completely. A statement was made by one of the lawyers indicating that they had done all they could for Elor in their capacity as his lawyers and would now work to assist him in other ways.  What he was referring to is not clear to me.

The remaining lawyer from the original team, Yoram Sheftel, will be handling the appeal.

Moshe Ya’alon – former defense minister while a member of Likud – has announced that he is forming a new party and will run for prime minister.

But there is no separate election for prime minister.  The chair of the party that gets the most mandates in an election assumes that role.  This, I would suggest, represents a very long shot for Ya’alon.  Especially is this the case as he has taken a beating in a just-released Comptroller’s Report regarding his conduct during the 2014 war in Gaza.

My hope is that, come election time, he will split the center-left, weakening all parties concerned.

I haven’t included a song in a posting in a long time, but I just picked up information on a new version of “Hallelujah” by Yonatan Razel.  I like it, and share it here along with his comments about the song: 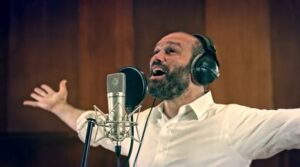