From Israel: “A Cry from the Heart!!”

I am eager to return to a focus on Israel.  In fact, I keep telling myself that that is what I’m going to do.  I know there are readers waiting for this.  But…while I will do it very soon, I find I cannot do it yet: What is happening in the US haunts me.  And so I circle back to this with a sense of urgency.

Election day is just three weeks away (although some have already voted by mail or will do so before November 3).

The outcome of this election is more critical for the future of America than any election in US history.

Voters need to make informed decisions, and it is not clear at all that this is happening.

The key to those informed decisions is determining what sort of policies would likely be advanced by each candidate.

Unfortunately, where Donald Trump is concerned, there are people who are turned off by his personality – his incessant tweeting, his braggadocio style, his “shoot-from-the-hip” comments. (I have never claimed that he is without faults.) 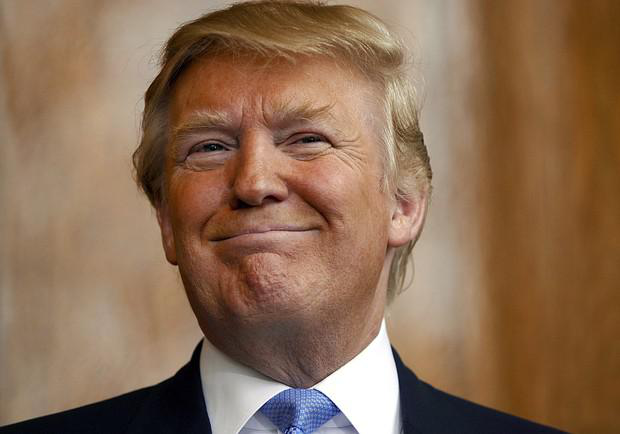 But it is a huge mistake to turn away from him for these reasons!!

What matters is where he would lead the country.

And where Trump is concerned there is a track record, so that it’s not difficult to determine what sort of policies he would likely advance going forward.

[] He has a reputation for keeping his word when he makes a commitment.

Most notably was this true with the relocation of the US Embassy to Jerusalem.  One presidential candidate after another had promised this while campaigning and then reneged.

He also kept his word regarding a wall at the border with Mexico: a barrier has been constructed that covers almost 2,000 miles of the US-Mexican border; it has significantly reduced illegal immigration.

Additionally he increased services to veterans, who had been neglected under Obama.  He kept his promise to increase veteran health care services and last year secured record funding for mental health services with the goal of addressing the tragic problem of veteran suicides.

[] He has been tough on Iran – breaking from the nuclear agreement and reinstituting sanctions.

[] He is also tough on Communist China, which is shaping up as a major threat to the Western world.

[] Before the advent of Covid–19, he had brought the country to a solid place economically.  Unemployment was down; this was particularly true within the black community, which had all-time record low unemployment.  Now, with Covid–19, economic recovery is taking place faster than had been expected.

[] He has an excellent relationship with Israel; he has recognized Israeli sovereignty in the Golan, and the US State Department in his administration declared that it had determined settlements in Judea and Samaria were not inconsistent with international law.  This was a very significant turn-around.

[] He has achieved unexpected successes in mediating peace treaties between Israel and Arab Gulf states, without the prerequisite of a “two-state solution.”

[] He is unabashedly a “law and order” president who supports the police and believes there is no room for violence in the streets.  He is prepared to send in the National Guard to protect federal installations and took a strong stand on the destruction of statues that were federal property.

[] He strengthened the military, which had been seriously weakened under Obama.

[] He has made Historically Black Colleges and Universities a priority, appropriating more money to HBCUs in one year than any other president ever had. He also signed into law the FUTURE Act, which sustains federal funding for minority-serving institutions.

The situation regarding Biden is considerably more complex. 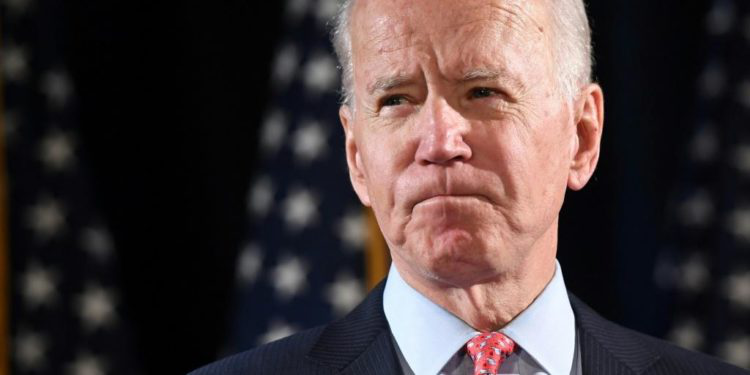 No one who has been following Biden’s statements and presentations can have failed to notice his gaffes:

He mixes up facts, saying, for example, that 200 million Americans have died from Covid when it is 200,000:

On one occasion, he explained to an audience he was about to address them because he was running for the United States Senate:

That comment about running for the Senate represented confusion about what era he was in (he was flashing backwards, as years ago he did run for the Senate) and he did something similar when he advised parents, “Play the radio, make sure the television — excuse me, make sure you have the record player on at night.”

He sometimes leaves out key parts of what he wants to say, on other occasions he mumbles or acts confused.

One of the most painful examples of his confusion involves his attempt to quote from the Declaration of Independence:

All of these incidents taken together indicate a problem of serious dimensions. Joe Biden has a cognitive problem, quite possibly early stage dementia. This fact is at one and the same time broadly acknowledged and yet ignored.  No one within the Democratic ranks is standing up and saying, Wait a second, Biden is not equipped to be president.

This surreal situation leaves me aghast.

What it suggests is that those supporting him and promoting him see him as a place holder, a figurehead, in the White House. Quite simply, he would not be calling the shots.

Who, then, would be calling the shots?  A major player here is former president Barack Obama, who has been very visible of late.  There is little doubt that he would be “advising” Biden in an effort to undo the Trump years and return to his earlier policies. 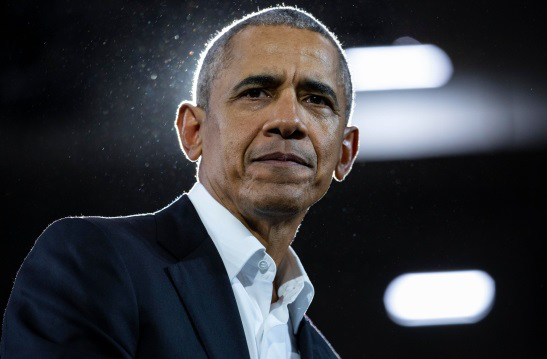 But there are others, as well. The far left progressives of Congress – including the “Squad,” (pictured) consisting of Representatives Ilhan Omar (D-MN), Rashida Tlaib (D-Mich), Alexandria Ocasio-Cortez (D-NY), and Ayanna Pressley (D-MA) – now call themselves the Working Families Party and have unveiled a new plan they refer to as “The People’s Charter.”  It includes free health care for all, reallocation of funding for police to educational programs, and the Green New Deal.

Those supporting this program indicate that if Biden wins he will be pressured to accept its platform.

“The People’s Charter is that destination.”

Would they be calling the shots in a Biden administration? 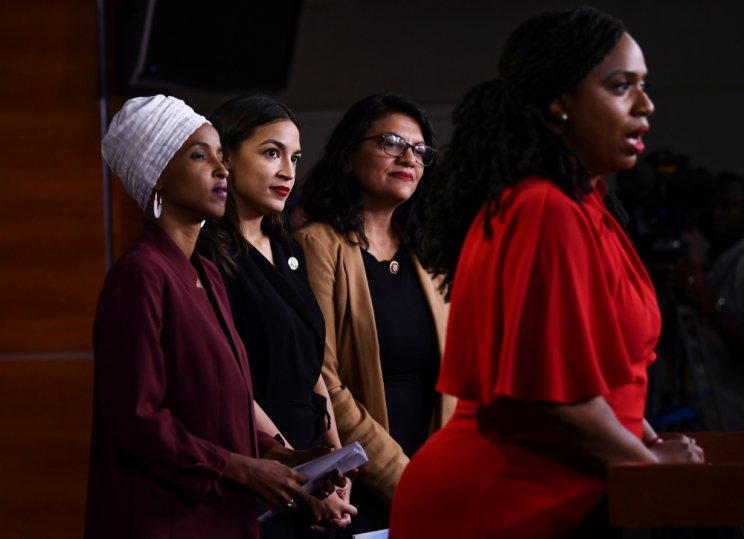 But wait!  We must not forget Kamala Harris, Biden’s running mate.  In one roundtable discussion, Harris referred to: “A Harris administration, together with Joe Biden as the president of the United States.”

She quickly corrected herself, but I would say this was a Freudian slip if ever there was one.  Her vision, it would seem, is Biden as figurehead with herself as primary decision-maker.

But then there is another scenario that is floating in the political atmosphere: Biden being elected and then retired from the scene because of mental incompetency.

Just days ago, Speaker Nancy Pelosi introduced legislation that would operate under the 25th amendment of the Constitution, which addresses procedures for removing a president from office when he is unfit to govern. The proposed legislation would apparently create a commission to assist in making this decision.

She was introducing it, she said, in light of concerns about Trump’s competency to hold office because of the medication he had been given when he contracted Corona:

But this was nonsense, because the president was already off of the medication and doctors were saying it was no longer in his system. And so, even if Pelosi was correct that medication had affected Trump’s judgement for a brief interval, this legislation would no longer be relevant to Trump’s situation.

Notice, then, how Pelosi shifts her argument:

She maintains that the measure was not directed at Trump but was, rather, an effort to codify procedures to help protect the security of the country in the future.

“This is not about President Trump…but he shows the need for us to create a process for future presidents.”

When a president is deemed incompetent, the vice president becomes acting president.

Trump swiftly tweeted that: “Crazy Nancy Pelosi is looking at the 25th Amendment in order to replace Joe Biden with Kamala Harris. The Dems want that to happen fast because Sleepy Joe is out of it!!!”

And you know what?  Trump is not totally off the mark to speculate on this.  It remains a real possibility.

And so, whether the administration would become a Harris-Biden administration, or Harris would move up to become acting president, the possibility that she would end up running the show if Biden is elected is very real.

Thus do I suggest that those planning to vote for Biden give very careful consideration to what Harris stands for and make some hard decisions regarding the acceptability of her positions for the nation. 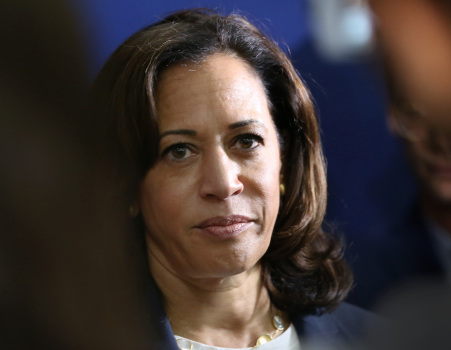 Keep in mind that as she campaigns she is representing herself as more mainstream moderate than she really is. In point of fact, she has one of the most radical voting records in the Senate.

Analyst Wayne Allyn Root says that “Harris has the most liberal voting record in the U.S. Senate, to the left of Bernie Sanders”:

With regard to the right to bear arms, which is enshrined in the Second Amendment of the Constitution, when she was campaigning to be the Democratic presidential candidate, she indicated a readiness to circumvent the Constitution.  If gun control legislation was not passed within 100 days, she declared, she would “take executive action.”

When Biden, debating her, chastised her, reminding here that there is a Constitution, she laughed, and replied, “Hey, Joe.  Instead of saying, ‘No, we can’t,’ let’s say, ‘Yes, we can.'”

Harris may have laughed – she laughs a lot, I have noticed, which suggests a failure to take issues seriously – but there is nothing funny about her cavalier attitude towards the Constitution. She is dangerous.

Harris is pushing socialist left positions. She supports the Green New Deal (with a price tag of $94 trillion) and ending private insurance, with Medicare for all.  Accompanying this would be greatly increased taxes to cover costs. Even so, ultimately, the socialist vision would collapse.

“If you buy what she’s selling, you’ll be crying all the way to the government-owned bank,” says Laura Ingraham, talk show host on “The Angle”:

See 18 seconds into the video below for her statement:

This is an inciteful statement and marks her disinclination to criticize the radicals on the street, or to call for a full cessation of all violence.

And so here you have it.

Political analyst Ben Shapiro has written about the refusal of the Democrats (it’s not just Harris) to condemn violence:

“…In truth, the category of ‘mostly peaceful’ [which is how the protests are often described] is a brand-new invention meant to obscure the simple fact that many of our cultural elites are fine with violence so long as those who engage in such violence have the proper goals.”

Think very, very hard about how you cast your vote.  Think about what you want for your country.

And share this with everyone you can.  So many facts are not broadly known.

Time is running out, but it is not too late to save America.