“Balagan of the First Order”

“Balagan of the First Order”

The Hebrew word “balagan” means confusion or muddle. “Ezeh balagan”: what a mess.

It is a most appropriate term, I think, for describing the news as it is coming to us these days.

The most recent, and potentially serious, flap has to do with what is presumed to be highly confidential intelligence information that President Trump shared with Russian Foreign Minister Sergey Lavrov (at left in the picture below) and Russian ambassador to the US Sergey Kislyak last Wednesday. 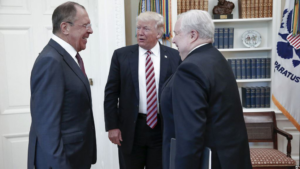 The information that was shared apparently involved an ISIS plot to use a laptop to blow up a US plane.

The original story, which appeared in The Washington Post, simply said that the information came from a Middle East country that had familiarity with ISIS operations.

The Times, citing American officials, said that at least some details of the plot came from Israel.  This, of course, leaves open the question of where the rest of the details came from: Jordan and Turkey have been suggested. The information was said to be so highly confidential that it was shared only with key US officials, and only on condition that they not reveal their source.

Following this, numerous news items surfaced about the fact that the Israeli spy (alluded to as an “asset”), who presumably had given his handler this information, was likely now at serious risk.  The working assumption was that he might not walk away with his head, if he were to be identified.

Some Israeli sources – people with considerable experience, but who are not currently in positions of responsibility – made statements about how Israel would have to be careful aboaut sharing information with the US from now on, and remarked on how much damage had been done.

There are holes in the story and multiple questions have been raised.

Israeli intelligence experts [who were consulted by media] said they could not confirm whether an Israeli asset was the source.

Kobi Michael, a senior research fellow at the Institute for National Security Studies said it was also possible it was a well-placed piece of signal intelligence.

“When it comes to ISIS, they are very active in the social network world and on digital platforms. So who knows, all options are valid, even if as far as I understand the context, it looks like a human intelligence source. (Emphasis added)

“What happened is a problem, it shouldn’t have happened. But mistakes do get made, not only by the Americans, but sometimes by the Israelis too.”

“These issues of information divulgence happen. The question is much broader, especially in how the information was prepared for him during the meeting. Did someone highlight things he should know, but not say?

“We’ve been with this president for four months and it has not calmed down, neither for him nor for the media…every issue [is] exploited politically.”

As to Sima Shine’s very pertinent question regarding whether the president was warned about things he should not say, we can go back to the Times article:

“It was not clear whether the president or the other Americans in the meeting were aware of the sensitivity of what was shared. Only afterward, when notes on the discussion were circulated among National Security Council officials, was the information flagged as too sensitive to be shared.” (Emphasis added)

Israelis serving in official capacities who commented on this situation confirmed nothing.  They appeared to be unruffled by the situation.

“The security relations between Israel and its greatest ally, the United States, are deep, significant and unprecedented in their scope and their contribution to our strength. That is how it always was and how it always will be.” 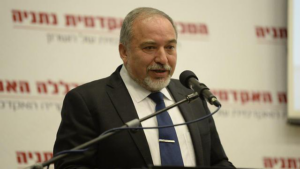 “I have complete confidence in the American intelligence community. Intelligence cooperation between Israel and the United States regarding the threats posed by Iran and its proxies and ISIS and its affiliates will continue and deepen.” 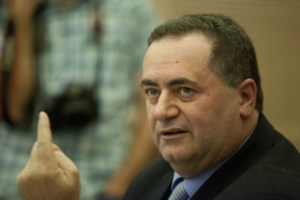 There was certainly a flurry of concern within the halls of Congress on this issue, with an expressed desire to have more complete information, and one Democratic call for impeachment.

However, according to President Trump’s national security adviser H. R. McMaster, Trump didn’t know where information that he shared with Russian officials came from.

The information, he says, was available through “open-source reporting.” Trump hadn’t been briefed on the source or method of [acquiring] the information.

“The president and the foreign minister reviewed a range of common threats to our two countries, including threats to civil aviation.

“At no time, at no time, were intelligence sources or methods discussed. And the president did not disclose any military operations that were not already publicly known. Two other senior officials who were present, including the Secretary of the State, remember the meeting the same way and have said so. Their on the record accounts should outweigh anonymous sources. I was in the room. It didn’t happen.”

And so, it well may be that Trump shared information that was classified – when he had not been sufficiently alerted in advance by his staff about the sensitivity of the information – but that he did not expose Israel.

However, questions keep popping up for which I have no answers.  Questions that cast doubt on the entire scenario as it has been presented in the media.

[] I had read that there was particular concern that it was Russia to which the information about an alleged Israeli spy in Syria had been leaked.  The worry was that Russia had a relationship with Syria and would impart the information.

But that’s backwards thinking.  Russian deplores ISIS, and is an ally of Assad, who also deplores ISIS.  What is more, Putin has a very positive relationship with Israel.  Was this concern then greatly exaggerated?

[] According to op-ed editor Seth Frantzman in today’s JPost, “the laptop ban on flights from Middle Eastern countries went into effect in March.”

That is, the information about the ISIS plot is months old.  Why, asks Frantzman, would the agent’s life only be in danger now?

[] Most significantly, I ask this:

If Trump did not name the source of information, does this mean that those US officials who subsequently leaked Trump’s conversation with the Russians and did mention the Israelis were seriously remiss?

Wait, let’s carry this thought further.  Even if Trump had leaked that information to the Russians, doesn’t a leak to the general public via a major paper also constitute a lapse in security?  Doesn’t their leak make it more likely that ISIS would learn of the alleged agent?

What it may boil down to is this: What, precisely, was the motivation of those US officials in making Israel’s involvement public, if not to cause President Trump great diplomatic and public harm?

That is a rhetorical question.  If their concern was a president with loose lips, there would have been more effective channels for handling this with discretion.

My best sense of the situation, from everything I’ve read, is that there is no direct threat to that Israeli spy in ISIS territory, if indeed he exists or was involved.  I believe the danger to him was exaggerated to emphasize the alleged harm done by the president.

The flap prior to this one involved statements from American officials as to whether the Kotel (the Western Wall) was in Israel.  It was reported here on Monday that:

“…a senior member of the US delegation making preparations for Donald Trump’s visit to Israel next week angrily rejected a request that Prime Minister Benjamin Netanyahu accompany the president when he visits the Western Wall, and then sniped at his Israeli counterparts that the Western Wall is ‘not your territory. It’s part of the West Bank.’” (Emphasis added)

Whoa!  A startling and unexpected statement that generated a good deal of anger.

The Western Wall is a portion of the retaining wall that supported the earthen compound on which the Second Temple was built.  The Temple was destroyed, but this portion of the wall remains and has special sanctity as a place of prayer.

It was liberated by Israel from Jordanian occupation in 1967. Today it stands within the united Jerusalem that Israel has declared to be the nation’s capital.   This was written into Israel’s Basic Law in 1980. 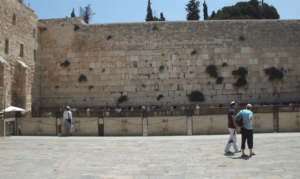 Israel wanted to know: Where was this coming from, and what did it say about Trump’s policies?

No American president has ever visited the Kotel, precisely because the Palestinian Arabs claim this area for themselves.  And so the news that President Trump had included the Kotel in his itinerary had been greeted with excitement.

A response was offered quickly:

A “senior administration official” declared that:

“The comments about the Western Wall were not authorized communication and they do not represent the position of the United States and certainly not of the president.”

We know how new US Ambassador to Israel David Friedman views the Kotel:  As soon as he arrived in the country, he went straight to there to pray: 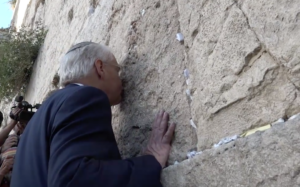 And we have here a good example of what US Ambassador to the UN Nikki Haley thinks.  She is proving herself to be a consistent and splendid friend of Israel:

So we can know with some certainty that the Trump administration is not hostile to Israel’s claim to Jerusalem.

The official who made that rude statement denying an Israeli connection to the Kotel claimed that the Trump’s approach to the wall would be “a private visit” and that he would go on his own.

Thus, Prime Minister Netanyahu could not accompany him and Israel could not even send TV cameras (“What are you talking about? It’s none of your business. It’s not even part of your responsibility”), for this would reinforce the perception that this was Israeli territory.

While another official has now stated that the statement by the first official was “unauthorized,” I have not read of any gesture towards our prime minister, inviting him to join the president. It still seems a “private visit” is planned that allows Trump and family to go to the Kotel, but with every effort made to avoid providing the perception that the Kotel is under Israel control.

Whatever his private convictions, Trump seems determined to walk an extraordinarily fine line here.  He’s looking for an Arab coalition to battle ISIS and doesn’t want to ruffle feathers.

I’m not convinced as of now that we will get much mileage at all out of Trump’s Kotel visit.

I want to mention, before leaving this topic, that the hostile administration official has been identified. It is David Berns, the political counselor at the US Consulate in Jerusalem. The consulate’s economic counselor, Jonathan Shrier, was also involved.

Actually, there are two US consulates in Jerusalem.  One, in the Talpiot neighborhood, is a genuine consulate, which provides consular services such as renewing US passports.  The one where these two trouble makers work is on Agron Street and serves as an unofficial embassy to the PA.  It reports directly to the State Department and not to the US embassy in Tel Aviv.

Both Berns and Shrier are Obama appointed hold-overs.  And we’re seeing this in multiple instances.  Top level appointments have been made by Trump, but beneath that top level, the swamp has not been cleared of Obama holdovers who work at cross-purposes to what Trump intends.

Trump’s visit begins in a mere four days.  His trip to Masada has been cancelled, presumably because of anticipated heat.  I do not expect him to announce an embassy move while he is here. But there is no point in making further predictions.

It will play out as it plays out.