The Iran deal is still there, hanging over us.  But it’s time to consider some other matters.

I begin with “Jewish nationalism and ‘the settlements,’” an op-ed by Moshe Dann, in today’s JPost.  It is highly relevant to current issues, as you will see as you read my full posting.  Dann writes (emphasis added):

“Jewish nationalism, Zionism, the reestablishment of a Jewish state in Eretz Yisrael [the Land of Israel], the homeland of the Jewish people, rooted in Torah, the Bible, and Jewish history, echoed in prophetic and rabbinic writing, and in prayer, is the most invigorating dynamic in Jewish life in modern times.  The uniqueness of Israel as a Jewish state is not only that it is connected to the Bible, documented history going back four millennia, but that it is the vehicle for the Third Jewish Commonwealth, a modern expression of Jewish civilization.

“It is no coincidence that the rebuilding of Jewish life in Judea and Samaria, the heartland of former Jewish civilizations, where, by definition, all “settlements” exist, is contended.  And it is no wonder that it is in this area, filled with religious Zionists, that Jewish nationalism is strongest, most vivid and unequivocal…The link between Jewish nationalism and Jewish settlements is crucial.

“Calls to ‘end the occupation,’ therefore attack not only the link between the Jewish people and Eretz Yisrael territoriality, but Zionism itself, the purpose and meaning of the Jewish state. Those attacks have been a source of controversy and confusion from Israel’s inception…”

“After 1948, and especially after the war in 1967, the state became an inspiration for many Jews to not only make aliyah, but to return to Judaism.  Jewish settlement is the point, and Jewish nationalism is at its core.

“But Jewish nationalism does not stand alone; it has as sister, Israel nationalism…

“…Judaism’s central importance in Israel’s national ethos is noted by nearly all Zionist writers and leaders, including Ben Gurion, and most Israeli Jews feel a deep connection with Eretz Yisrael, Jewish heritage and the Jewish people.  This intimate, subtle belief, often taken for granted, provides social cohesion and the ability to withstand physical and ideological attack.

“Arguments over territory, therefore, over what belongs to Israel and the Jewish people, are not only legal and historical; they are fundamentally ideological.”

“Opposition to ‘the occupation’ – Israeli control of and settlement in areas won in the 1967 Six Day War – has become a standard of the international community.

“But during the 1970s and 1980s,” explains Dann, “massive numbers of Jews” built communities in Judea and Samaria, supported by every Israeli government.  Israeli civil law was applied to the Golan Heights and to eastern Jerusalem and the Old City, but not to other areas because of international opposition.

The Oslo Accords shifted the situation, “by establishing the Palestinian Authority, providing it with resources, and placing Areas A and B (and Gaza) – in which nearly all Arab Palestinians reside – under its control.

“All Jewish settlements are in Area C under Israeli civilian and military control.

Dann clarifies that while, “the international community opposes settlement in Judea and Samaria,” Arabs are opposed to the establishment of the State of Israel and lands acquired in the war of 1948-49.

“’Ending the occupation,’ according to the Muslim and Arab world, is not about creating a ‘two-state solution,’ but the destruction of the State of Israel itself.

“Rooted in Jew hatred and vengeance and violence, Palestinian nationalism, moreover, is promoted as ‘self-determination’ and ‘two states for two peoples.’  Although appealing to humanitarian values, it is subterfuge…

“Presenting the conflict as one between contending nationalities seeks to create symmetry, but does not meet the demands of Palestinianism or Jewish nationalism; it is inherently contradictory and self-defeating…”

“That many countries and international bodies recognize a Palestinian state,” says Dann, “does not diminish the dangers inherent in that presumptive state…

Before it is anything else, this piece by Dann is ideological.  It takes in a broader scope and reminds us what we are all about.  This appealed to me especially now because we are caught in a morass of practical struggles, and it helps enormously to remember what we are about.  That perception can hopefully provide strength we so desperately need.

The European Union and individual European states have been funding illegal building for Palestinian Arabs in Area C of Judea and Samaria – the area under full Israeli military and civilian control according to Oslo.  The Israeli Foreign Ministry has demanded that the EU stop flouting Israeli law in doing this – has in fact delivered multiple warnings on the issue.  Construction and establishment of infrastructure is not permitted without proper permits, and the EU simply forges ahead as it pleases.

Not only does it forge ahead, it identifies its structures with its logo, presumably under the assumption, not ill-founded, that this provide a modicum of protection for the building: 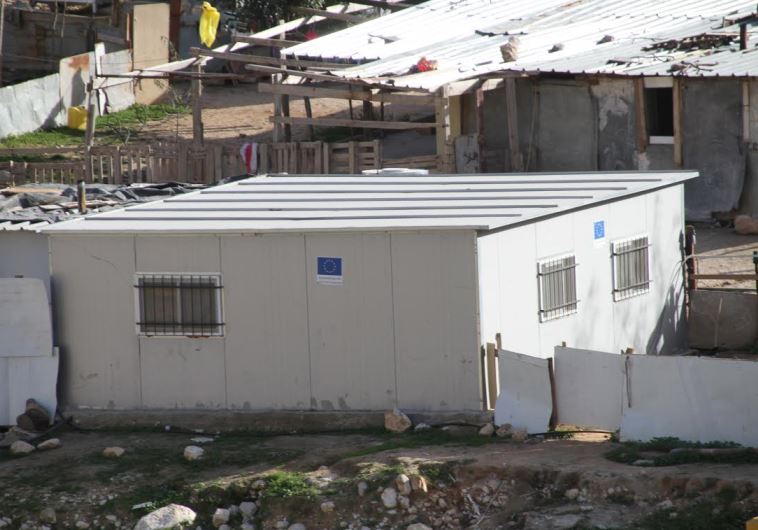 Two areas of greatest concern in terms of construction is in the E1 area of Ma’aleh Adumim, and (incredibly) on IDF firing ranges.  In total there are close to 1,000 EU-funded structures in Area C of Judea and Samaria.

Israel has warned the EU that buildings they put up may be demolished, and, in fact, 40 illegal structures funded by the international community have been demolished since the beginning of 2014.  The Civil Administration – which works under the IDF in administering Judea and Samaria – has been accused of reticence in acting against the illegal building because of international involvement, but there seems to be a stepped up vigilance of late.

The EU, of course, vociferously objects to demolishment of structures it has funded.  It defends its actions as “humanitarian assistance,” which it will continue to provide.  Drawing upon that handy catch phrase, “international law,” the EU claims Israel has an obligation to protect development for the “local population.”

I would be pleased to see precisely which “international law” they are invoking.  Especially as this is not an issue of providing for the “local population” of Area C at all!

The reality is that Arabs are being brought in by the PA from Areas A and B, which are under it’s administration, and settled in Area C.  The EU is lending a helping hand, shall we say, precisely because it wishes to undermine Israeli control in Judea and Samaria.

Motti Yogev (Bayit Yehudi) made this clear at a recent meeting of a subcommittee of the Knesset Defense and Foreign Affairs Committee, which he chairs:

“This isn’t spontaneous construction that addresses a local need. It is an integral part of the Palestinian strategy to establish facts on the ground to stop the expansion of settlements such as Ma’aleh Adumim.”  (Full emphasis added)

Even further, I had learned previously that it’s part of a PA plan to establish facts on the ground towards the declaration of a Palestinian state without the need to negotiate.

Coordinator of Government Activities in the Territories Maj.-Gen. Yoav Mordechai (pictured) was even more explicit at the subcommittee meeting: “There is a war over Area C.” (full emphasis added)

And so, a maximum in strength is needed, which means we also need to know why it matters.

The NGO Regavim testified at the subcommittee hearing on illegal building that I alluded to above.  This organization is at the forefront of fighting the fight for Jewish rights to the land: I have written about their work several times.

Regavim has been fighting on the issue of illegal Bedouin housing in Susiyia in the south.  There has been a tremendous amount of publicity about this, with the international community intervening inappropriately.  You can read about it here: http://regavim.org/susiya_facts/

On August 27, Regavim is sponsoring a unique educational trip to this area.  You will be able to see the modern Israeli community there, the ancient synagogue, and the illegal Arab encampment with EU buildings.

If you live in Israel, or will be visiting at this time, I encourage you to consider joining the trip.