With nightfall comes the wail, and Israelis stand at attention for a minute:  Yom HaZikaron, the Day of Remembrance of those who have fallen in protecting Israel, has begun.  It is day of utmost seriousness here.  In all, 22,682 soldiers have fallen; this year alone 112 soldiers were added to the toll.

It is not only the family that mourns the fallen soldier.  It is his comrades.  The IDF is an army like no other in the world — a people’s army, where most serve, and then continue to serve yearly in reserve duty.  Those who serve together over the years are bonded.  And when there is a loss, the bonding extends to the grieving family.  I have heard incredible stories about the ties that are formed, and the ways in which young men rush to attend to the needs of the relatives of their comrade who has been lost. 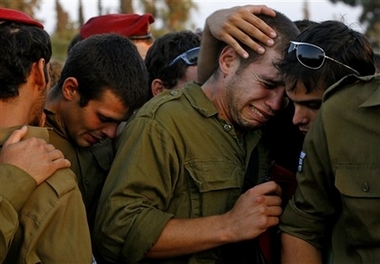 Rabbi Stewart Weiss, writing in the JPost on Friday, said this:

“…our soldiers march on, absolutely secure in their knowledge that they are the primary line of defense, which allows everyone else in the country to pursue a normal life.  Observant soldiers — who are fast becoming the majority of the IDF’s career officers — know in their hearts that they are G-d’s holy messengers performing the ultimate mitzvah: putting into practice G-d’s promise to watch over and guard His beloved nation.  In the army, our soldiers — though underpaid and over underfed– live and breath the sacred ideals of unity,purpose and self-sacrifice that raise the moral bar for our entire society.”

Also in Friday’s JPost was a most incredible story, told by Barbara Sofer.  It’s about sacrifice and connectedness, and it made me weep.  Briefly:

Twelve years ago, Uriel Peretz, the eldest son of Miriam and Eliezer Peretz, originally from Morocco, was killed in battle in Lebanon.  His M-16 was passed to another soldier in his unit, Gadi Ezra, the youngest son of Roseline and Soli Ezra, from Algeria and Egypt respectively.  In 2002, he, as Ari Weiss (above), participated in Operation Defensive Shield. When he fought in Jenin, his commanding officer was the younger brother of Uriel Peretz:  Eliraz Peretz.

In Jenin, Gadi bent to help a wounded soldier and took a bullet in the neck.  “You have to save me!” Gadi cried to Eliraz.  Then, he died in Eliraz’s arms, calling “Shema Yisrael.”

Gadi, it turned out, had written a letter to his fiancee before he died.  Sofer provides a shortened, translated version:

“My Dear Galiti, If this letter reaches you, it means that something has happened to me. This morning, we were informed that the mission planned yesterday, with the Almighty’s help, will take place today. My beloved, on one hand I feel that there is nothing more that I want in this world than to be with you – to love you and establish a home and a family with you. But on the other hand, there isn’t anything I want more than to be a part of this military operation and strike those terrorists a blow so strong that they will never again even consider carrying out a terrorist attack.

“Don’t be angry with me, my love, but at moments like this, your feeling for klal Yisrael (the people of Israel) is the feeling that is supposed to guide you – and you relate to this evil as if your private life does not exist.

“To do this, there is a price that we must pay. I am willing to be that price. Soldiers of King David’s army would free their wives from marriage before going into battle. My beautiful one, I love you so much and the only grief of mine is that you will have sorrow and I won’t be the one who will be privileged to make you happy.

“You deserve all the happiness in the world. I will always watch over you from wherever I am and I will see to it that you will meet someone who will make you even happier than I could have made you. Only promise me that you will continue onward and will not allow Sodom to be the victor. I will love you forever, Gadi.” 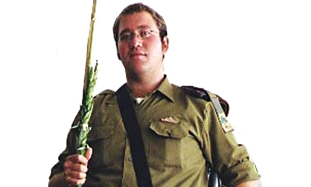 When Eliraz Peretz went to pay a condolence call to the Ezra family, he brought with him his fiancee, Shlomit Gilboa, who spent her time attempting to comfort Galit, to whom that letter had been written.  She embraced her as family and included her in various events surrounding her upcoming wedding to Eliraz.  Very quickly, the Gilboa family determined that Galit would be perfect with Shlomit’s brother, Eliezer.  Later Eliraz said he felt that this was what Gadi had asked of him when he cried, “Help me!”  His job was to introduce Galit to Eliezer.  And, indeed, Galit and Eliezer did marry, and today have four sons.

At the time that Gadi was killed, Eliraz was wounded. When he returned to his unit, he was assigned a different M-16.  Only later did he realize that it had been Gadi’s and before that belonged to his brother.

Then, last month, Eliraz Peretz, Uriel’s younger brother, was killed in Gaza, in an exchange of fire with terrorists attempting to plant explosives along the fence.  A member of the Golani Brigade, he left behind four children under six years of age, and Miriam now mourns two sons.

Gadi’s older brother has the M-16.

“May all the memories of the fallen be for a blessing.  Maybe we be privileged to defend the State of Israel with words, and not to be put to the ultimate test.”

I wrote about Eliraz’s funeral when he died, because the words of his mother Miriam (now a widow), were so stunning:  She said that her sons fell so that “the entire nation of Israel can live safely here.”

We are, I believe, a very special people.

With everything else, the JPost on Friday also carried a major story about her.  Read it:

Because of the grave importance of the issue — and, indeed, the way in which it may ultimately impinge on us here — I shift gears for one brief moment to share a link to a New York Times article.

“Defense Secretary Robert M. Gates has warned in a secret three-page memorandum to top White House officials that the United States does not have an effective long-range policy for dealing with Iran’s steady progress toward nuclear capability, according to government officials familiar with the document.”

The classified document was written in January and addressed “new options for Mr. Obama. They include a set of military alternatives, still under development, to be considered should diplomacy and sanctions fail to force Iran to change course.”