I’m back to normal (whatever that means) after Pesach, but don’t see that anything of enormous import seems to have happened over the holiday week.

I ended with good news before the chag, and will pick up with a continuation of that same good news — this concerning Zakkai, who had surgery to remove a tumor from his spine right before Pesach. The update on this is that an MRI was done, and, indeed, the surgeons got everything off his spine.  Baruch Hashem!  In about two weeks he will have similar surgery in his thoracic cavity, and, as long as the tumor is not adhering too persistently to his aorta, it is expected to go well.  Keep praying.

Yet, clearly, it’s not history and Jewish rights that concern Abdullah, but rather retaining control of his Hashemite throne.  And so it has been announced that the Jordanian citizenship of PA and PLO officials will be renounced; whether this will apply to Mahmoud Abbas is not clear.  This move is being announced in tandem with a new law that will limit Palestinian Arab representation in the Jordanian legislature.  According to Khaled Abu Toameh, writing in the JPost a couple of days ago, in addition to these moves, Jordan’s interior minister will be refusing to take in 1,100 Palestinian Arabs stranded at the Syrian-Jordanian border as a result of the turmoil in Syria.

You might want to see the clip below, from MEMRI, showing a Jordanian cleric doing saber-rattling against Israel during a Friday sermon last month broadcast on Jordanian TV.  This is the tone that plays right now.

All in all a “ho hum” document that will be followed by a “ho hum” meeting between Netanyahu and Fayyad, perhaps this week.

Today is “flytilla” day — the day that pro-Palestinian activists designated for having some hundreds if not a thousand Palestinian Arab supporters enter Israel via Ben Gurion Airport, and disperse to Palestinian areas to “lend support.”  Been there, done that.  And just as the first “flytilla” day fizzled, so does it seem this one will.  Dozens of activists — many of whom have been identified by Israel as troublemakers — are being stopped at European airports as they attempt to board planes to Israel, with such airlines as Air France, Lufthansa and British Airways cooperating; others are being stopped in the airport here.

Some of the “peaceful” activists in the airports in Brussels and Paris are reported to have wrestled with police when prevented from boarding planes. Those wishing to participate have been blocked in Canada, Portugal and elsewhere, as well. 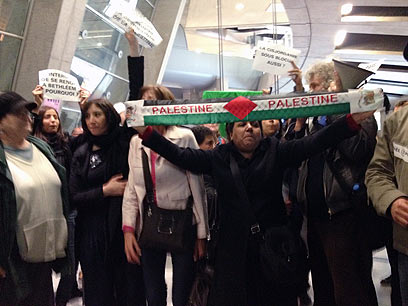 Those coming into Ben Gurion are being presented with an official letter from the Israeli government, which has been translated into several languages.  It reads:

“But instead you chose to protest against Israel, the Middle East’s sole democracy, where women are equal, the press criticizes the government, human rights organizations can operate freely, religious freedom is protected for all and minorities do not live in fear.

“Therefore we suggest you first solve the real problems of the region, and then come back and share with us your experience. Have a nice flight.”

By far the most troubling issue, in the midst of all this small stuff, is what is happening with Iran.  The six international powers (the Security Council permanent members plus Germany) met with Iran in Istanbul yesterday.  Even before that meeting, Iran had rejected two key demands — suspension of high-level uranium enrichment and closing of the Fordow underground enrichment facility near Qom.

This tells us all we need to know about Iranian intentions. And yet, now, after yesterday’s meeting, Western diplomats are declaring themselves encouraged because there will be another meeting on May 23.  “The dialogue” is progressing, you see.

I want to ask, “what dialogue?” And I would laugh at them all, clowns that they are — if the willful blindness of the international community were not so terrifying.  This is not going to go where it needs to go.  But pretense that something is happening apparently makes the Western leaders comfortable — for it provides them with an excuse to do nothing.

Said Catherine Ashton, EU foreign policy chief,  “We want now to move to a sustained process of serious dialogue, where we can take urgent practical steps to build confidence.”

This is painful.  Confidence in whom, pray tell?

What is so very infuriating is the difficult spot in which all this places Israel — with intent, of course.  We are “waiting to see how matters work out.”  We know full well that nothing constructive is going to happen, but were we to attack now we would be accused of subverting a diplomatic resolution that was in progress.

The question is one of how long we wait before we declare that enough is enough.  Israel has set the bar higher than the Western powers.  What others may declare acceptable, we will not.  As I understand it, Netanyahu said last week that the talks should lead to removal of all enriched uranium from Iran, a halt to further enrichment, and closure of the facility at Qom.  Barak set a bar that was slightly lower, saying that while all 20% enriched uranium had to be relinquished, a certain percentage of 3.5% enriched uranium could be retained for peaceful purposes.

Just to show how confusing the situation is: I have just read two commentaries, one of which said that Israel would be happy to take a breather from this issue and a second that suggested that we might move the date for hitting Iran closer once it was clear that nothing was going to happen and that additional waiting would be futile.

See Israel Hayom’s article on this subject, “On nuclear talks, one step sideways, two steps back” (All emphasis added):

“A strange meeting took place in Istanbul on Saturday. Both sides to the renewed nuclear talks between Iran and the major world powers tried to present a new concept: succeeding in negotiations without making any progress. Under these circumstances, it came as no real shock to anyone that the big achievement coming out of the talks was the general agreement that there is even an issue to discuss, and there is also a date and a venue for the next round: May 23, in Baghdad.

“…While the six powers communicated their stance, Iran gained precisely what it was after: time. It is no wonder that Iran’s leaders were all smiles following the meeting. ‘We didn’t expect to be received in this way,’ said one member of the delegation from Tehran. ‘We didn’t think that the world powers would display such a positive attitude.’

He added that the Western delegations were enthused by the fatwa (Islamic decree) issued by Iran’s Supreme Leader Ayatollah Ali Khamenei against nuclear weapons, calling it an example for other nations. The head of the Iranian delegation, Saeed Jalili, also presented the meeting as a big achievement, telling reporters that the West understood that ‘for the Iranian people the language of threats and pressure doesn’t work.’

Ilan Berman calls negotiations with Iran “the gift that keeps on giving: a surefire way to delay (and possibly even derail) a forceful Western response.

“For the United States and its allies, meanwhile…negotiations will provide a temporary reprieve, deferring some hard choices about whether force will ultimately be needed to stop Iran’s nuclear progress.

“If history is any indication, however, they won’t eliminate them.”

For a smile, I close with the link to the Israel 21C story, on the top ten must-see buildings in Israel: