From Israel: “A Very Swift Pain!!”

With regard to the elections and their tortuous aftermath.  Of course.

As this is a professional posting, I refrain from telling you where the pain is.  In any event, you may be feeling the very same discomfort.

But I want to preface my discussion of what’s going on with some personal thoughts:

When I went to vote this past Tuesday, I felt an enormous sense of pride and gratitude welling up inside of me. This may come as a major surprise to those who groaned at having to vote again after voting in April. Yet it is so. I have been here for 18 years, and am forever grateful to be an Israeli. Voting, feeling myself an integral part of the process, continues to touch me.

For all of our manifold weaknesses with regard to our electoral system, Israel is a magnificent country, and the Israeli people are special indeed.  We are unique in our sense purpose, which is derived from our ancient heritage.  After just over 70 years, we are still a modern nation in formation. 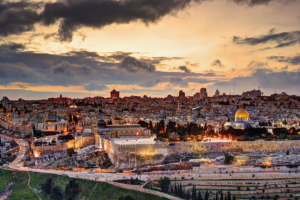 And so, I urge you to understand our process as you can, and then step back from it to see the land and the people from a more expansive perspective.

And now the mundane:

I know the Israeli system is very confusing, and I understand that many are having trouble wrapping their heads around it, especially as the current situation has been particularly complex. 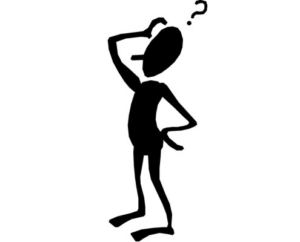 I will do my best to provide clarifications…

Please be advised that the situation is shifting so fast, that it may have changed by the time this reaches your inboxes.  This is merely an interim report, to be followed with additional news next week.  Not even the election count is final yet and will not be until next week.  About 90% of the votes have been counted but the votes of soldiers various diplomats are still being tallied.

Once again, we are at an electoral stalemate. As of yesterday, this was the count as published in the JPost:

We do not elect a prime minister.  We vote for parties.

There were actually almost 30 parties running in the election – itself a weakness in the system, as most of these parties do not pass the threshold and votes are lost.

The way our system works, after the election the president – currently Ruby Rivlin – consults with heads of all the parties, who indicate their choices for prime minister.  Enormously eager to move matters along, he will begin this process on Sunday. 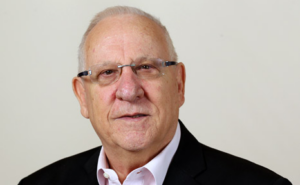 At least in theory, the president is supposed to charge the head of the party who has received the most recommendations with the task of forming a governing coalition.  This person, if he or she is successful, becomes prime minister.

The current situation is complicated: Blue and White has two more mandates than Likud, but the right wing block, which includes the two haredi parties (collectively 17 mandates) and Yamina (7) is larger than the left wing bloc, which includes Democratic Union (5) and Labor (6).

This is without the Arab Joint List (13) which until now has always sat in the opposition, or Lieberman (7), who has not yet revealed his choice but is likely to go with Gantz.  Even with Lieberman, I will note, the left bloc would still have fewer mandates than the right bloc.

Presumably, Rivlin will select Netanyahu.  But we won’t know this until next week, when the final, official count is announced, after which he will declare his decision.  That decision is in doubt because neither party can demonstrate capacity to form a government.

There have been unending discussions as to how one bloc or the other might achieve 61 mandates.

The very worrisome potential role of the Arabs is a part of the mix now.  I do not believe Blue and White would bring them into the coalition, but there is talk about it.  I am staunchly and adamantly opposed to their inclusion, not because they are Arabs (we’ve had a Druze minister), but because these parties are anti-Zionist and including them would be an anathema.

There have been thoughts (which I have written about) that Amir Peretz, head of the floundering Labor party, with the proper inducements, might join the right wing bloc.  This would get Likud the necessary 61 mandates. But Peretz has already declared, Don’t come calling, I’m not interested.  (Could his mind be changed?)

Lieberman?  Bringing him into the right wing bloc with the haredi parties that he has so viciously campaigned against would be an impossibility.

And so it has gone. 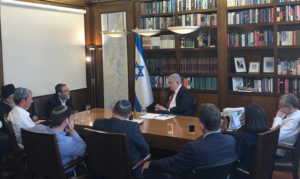 “I come here after a meeting with the leaders of the National Camp parties. We unanimously decided that we will go together into negotiations for the establishment of a government headed by me.

“We will conduct the negotiations with one delegation, Yariv Levin will be at the head. 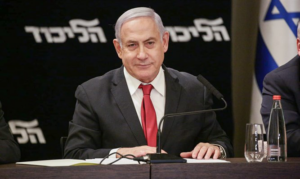 In no time at all, Ayelet Shaked, head of Yamina, declared:

“Netanyahu’s right-wing bloc is an interesting idea, but it is not a done deal. We will have to make sure our interests are represented.”

My immediate response was a groan: “Our interests”? Can’t they hang together?

But the explanation of Minister Bezalel Smotrich clarified her statement: Yamina was seeking a public statement from Netanyahu committing to inclusion of Yamina in any deal that was struck.  That is, they wanted to be sure he wouldn’t toss Yamina aside in a deal with Gantz.

Netanyahu then spoke at a memorial ceremony for Shimon Peres and announced:

“There’s no reason for us to go for further elections. I’m against it. A broad unity government is the order of the day.”  He called on Opposition Chairman Benny Gantz to meet with him as soon as possible to discuss this.

At the same ceremony, President Rivlin congratulated the prime minister for this constructive approach.

At this point, just briefly, I actually hoped I might be seeing light at the end of this long electoral tunnel:

With the current stalemated situation a unity government may be the only solution.  Heaven forbid!  A third election.

It seemed to me that Netanyahu was playing it smart – gathering his right wing factions to stand as a bloc for negotiations that would lead to unity, but with certain right wing demands advanced.

If Netanyahu is selected by the president to form the government, and he is then the initiator of a unity agreement, he would be the prime minister for the first two years, followed by Gantz down the road.

Some people, however, are suggesting that Netanyahu actually wants Gantz to be selected.  Then if he fails – which, barring Arab participation, he would – he would be the weaker party going into unity negotiations that Netanyahu would subsequently advance. (Is your head spinning yet?)

He won’t be dictated to by Netanyahu, who has proposed negotiating unity by coming with a bloc that includes the religious parties. (Now we see the concern of Shaked and Smotrich!)

“Blue and White won the elections.  Blue and White is the biggest party. I intend to form a broad unity government headed by me, which would reflect the people’s choice.” 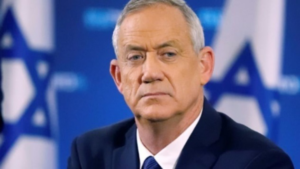 Yair Lapid, of Yesh Atid, a faction of Blue and White, came out slugging:

“He’s simply unwilling to accept the results of the election. One person is preventing the formation of a liberal unity government. One person.

“That’s the aim of the bloc of extortionists and extremists he created yesterday. That’s the aim of all the spin he’s throwing around in the last few hours. The public didn’t give him their support, so he’s trying to replace the public.”

I deplore Lapid. Gantz is incompetent and unexperienced.  But Lapid is vicious. He has conducted a campaign that was ugly with regard to religion and the haredi parties in particular.  He abandoned civility and increased the religious-secular divide in this country. And it seems it is not over.

In the end, what Gantz and Lapid are saying is simply not true:  They claim that because Blue and White has two more mandates than Likud, this represents the “will of the people” who want a secular, liberal government. But, as I have been pointing out, the right wing bloc – which includes three religious parties – is larger than the left wing bloc.  That is the “will of the people.”

Netanyahu, who expressed disappointment at Gantz’s declaration, has responded that:

“The president called for unity, and without a meeting between the leaders of the two biggest parties a unity government cannot be formed.

“Israel needs a unity government that is as broad as possible — not repeat elections and definitely not a government that relies on the support of anti-Zionist parties. Gantz, my offer for a meeting still stands. That is what the public expects of us.”

The prime minister has indicated that he had hoped for a right wing government, but as that isn’t possible, he believes there should be a unity government that is as broad as possible and represents “all those who love Israel.”

Note that Lapid speaks of a “liberal unity government,” but does not really intend unity, as he rules out parties that don’t agree with his philosophy from the get-go.

Only Heaven knows how this will be resolved. Much depends on Ruby Rivlin. I will pick up on the story next week.