LGC – San Remo – A Conference and a Resolution

In April, 1920, following the end of World War I, the Allies met in San Remo, Italy, to decide on the division of territory acquired
from the Ottomans as a result of the war. 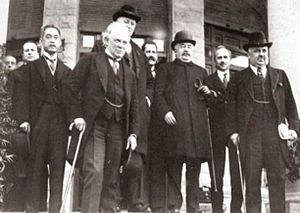 Among the issues that the Conference dealt with was the allocation of Class “A” League of Nations Mandates to former Ottoman
territories in the Middle East.

The Mandate System had been incorporated into the League of Nations charter in 1919. Class “A” Mandates referred to
territories that would be administered for a relatively short period of time by an Allied nation, but which were considered to be ready
to receive independence before very long.

Great Britain received the Mandate for Palestine.  The Resolution incorporated the Balfour Declaration into this Mandate.

The San Remo Resolution was the first international legal document that recognized the establishment of a Jewish homeland in
Palestine. This resolution gave the Jewish people exclusive political rights in Palestine.

Back to “The Facts”