In brief: HISTORY OF MODERN ISRAEL I

Background: Beginning of Common Era to 1917
When the Romans finally destroyed the last of Jewish independence in the ancient world, almost 2,000 years ago, they sought to erase all Jewish connection to the land.

And so, instead of using the name Judea, they adopted the name Palastina. Anglicized today, this is “Palestine.” Over the centuries, the region was controlled by a substantial number of occupiers but was always treated as no more than an appendage to a larger empire or holding, administered by outsiders from elsewhere. From the end of the Second Jewish Commonwealth to the establishment of modern Israel, there was never a state (or other local autonomy) known as Palestine. It should be noted, however, that there was a continuous Jewish presence in the area.

By the 12th Century CE, the term “Palestine” was being used only informally, at different times referring to different areas. Only in modern times did “Palestine” come to have a specific designation again.

From 1517-1917, the region was part of the vast Muslim (Turkish) Ottoman Empire, and was ruled from Damascus. 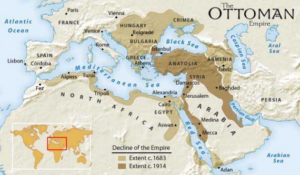 Jews had already begun immigration into Palestine in substantial numbers by the 1880s, with the goal of re-establishing a Jewish state there. (The Zionist Movement was officially founded by Theodor Herzl, in 1897.) As the Jews cleared swamps and attempted to revitalize the land, a substantial immigration of Arabs from neighboring areas was generated; the Arabs were drawn by employment opportunities and healthier living conditions.

Balfour Declaration
In 1917, British Foreign Secretary Lord Walter Balfour wrote a letter on behalf of the British government to Lord Walter Rothschild, a leader of the British Jewish community, for transmission to the Zionist Federation of Great Britain.  It said:

His majesty’s government view with favour the establishment in Palestine of a national home for the Jewish people, and will use their best endeavors to facilitate the achievement of this object.

This declaration was the first modern recognition of the right of the Jews to reconstitute their homeland in Palestine.  According to international law, it was binding on Britain from the time it was issued.

San Remo Resolution
After the Ottomans were defeated at the end of World War I (1914-1918), the victorious allies moved to divide up the Empire.  In 1920, they met in San Remo, Italy, and established the Mandate system.  Britain was appointed Mandatory for Palestine.

The San Remo Resolution was the first international legal document that recognized the establishment of a Jewish homeland in Palestine.

The British Mandate for Palestine drew directly on the wording of the Balfour Declaration.

(The mandate system in the former Ottoman Empire assigned official responsibility for administering specific areas to European nations, with the goal of enabling future independence of those areas.  Britain acquired Iraq and Palestine; France acquired Syria, which includes what is today Lebanon.)

Once the Mandate for Palestine went to Great Britain, “Palestine” had a very specific, internationally recognized, designation. It was an area defined in today’s terms by Israel, the Gaza Strip, Judea and Samaria, and Jordan. (Briefly, part of the Golan Heights was included, but then given to France.) 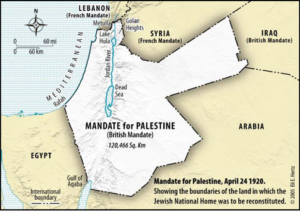 In receiving the Mandate for Palestine, Britain was charged with “secur(ing) the establishment of the Jewish national home,” which meant, in the words of the Mandate, that Britain was to “facilitate Jewish immigration” and “encourage close settlement by Jews on the land.”

Palestine Divided
In 1923, the British divided their mandated area of Palestine into two administrative districts. Thereafter, only the region west of the Jordan River would be called “Palestine,” and it would be only here that Jews would be permitted to settle and establish their homeland.

The territory east of the Jordan River was given to Emir Abdullah of the Hashemite family from Hejaz (now Saudi Arabia). He was not indigenous – not an Arab from Palestine. The area was renamed Trans-Jordan (meaning across the Jordan River) and became Jordan in 1946 when it became an independent country. Jews were not permitted to live there, although Arabs lived in Palestine. 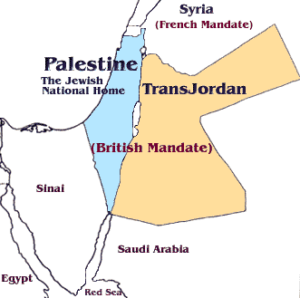 The British had cut off 75% of the area originally proposed as a Jewish Homeland to form an Arab state. With this, the Palestinian Arabs had their “Palestinian” state.

The Arabs in Palestine, however, were not content with the Arab state being formed on the east bank of the Jordan River; they sought to drive the Jews out altogether and to also claim Palestine as theirs. This attitude was fueled by a deep seated resentment at having a Jewish presence on what was perceived religiously as “Muslim” territory (from the time of the Ottomans). Murderous attacks were launched, notably the Hebron massacre of 1929. From 1936-39 there was an “Arab Revolt,” headed by Mufti Haj Amin al-Husseini, a relative and mentor of Yasser Arafat.

At a later date, the Mufti openly cooperated with the Nazis in the killing of Jews. 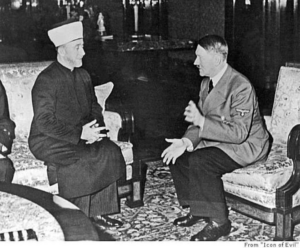 The Arab revolt promoted a general strike; terrorism was launched against both British and Jewish targets.

The British military was able to quell the violence, but politically the British caved to Arab demands and surrendered its commitment under the Mandate to foster a Jewish Homeland in all of Palestine. The Peel Commission was charged with investigating the situation and in 1937 delivered its recommendations:

That Jewish immigration be frozen, with a maximum of 12,000 per year permitted for five years and none thereafter, and that Palestine be partitioned.

At that point, partition was rejected by the British but they were clearly tilting towards the Arabs: Jewish rights were not supported. During World War II, as Jews attempted to flee Hitler, they found the gates to Palestine substantially blocked by the British – who had failed to honor their Mandate obligation.

The Haganah, the forerunner of the Israeli Defense Forces [IDF], was established for self-defense; its elite fighting units were the Palmach. 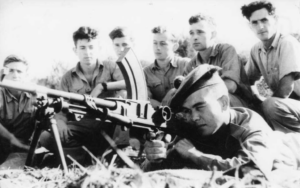 A Jewish underground was also established.  A spin-off from the Haganah, the Irgun was based on principles espoused by Ze’ev Jabotinsky, who believed that every Jew had a right to come to Palestine. It not only fought the Arabs, but also acted against the pro-Arab British, and promoted illegal aliyah (immigration into Palestine) when Jews were fleeing the Holocaust.  Menachem Begin, who later became prime minister of Israel, was a leader within this group. 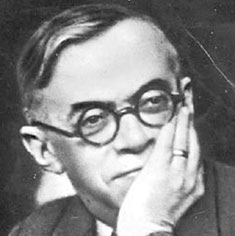 In 1947 the British decided that they had had enough; in the face of the Arab unrest, they were not prepared to fulfill their obligation under the Mandate. They declared their intention to pull out of Palestine and turn the matter over to the United Nations.

The United Nations, direct successor to the League of Nations, which had shut down in 1946, had assumed responsibility for the League’s Mandate system by virtue of Article 80 of its charter.

Resolution 181: A failed proposition
The UN General Assembly, on November 29, 1947, then passed Resolution 181 —informally referred to as “the Partition Plan”—which called for Palestine to be partitioned according to population concentration, with Jerusalem under international jurisdiction. 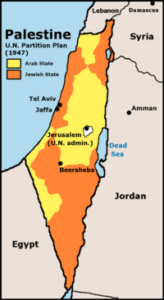 This map was a proposal for the partition of Palestine, it was not final.

Thus this resolution had no standing in international law.

The Jews accepted it, based on the plan for intense cooperation that was part of Resolution 181:

The proposal did not simply set up two states, it described an economic federation of those states, with shared infrastructure, shared currency and more In addition, the two states were to be democratic, protect civil rights and prohibit discrimination.

The Arabs rejected it.  They were unwilling to acknowledge a Jewish state in any part of Palestine.  In fact, the Arab Higher Commission rejected the authority of the UN to propose partition at all.

So intense was Arab rejection of the proposal that the UN Commission that was to set details of the plan in place – including final borders – was thwarted; it never even met and was finally disbanded.

Had both parties accepted it, the partition would have had legal standing as an agreement between the two.

As the situation evolved, however, the resolution was null and void: the Mandate definition of Palestine as a Jewish homeland stands in international law.

The Jewish world rejoiced on November 29, 1947, because the resolution was an official indication of the readiness of the international community to see a Jewish state established. 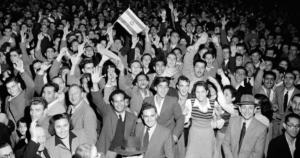 Yet, this resolution did not establish the State of Israel.

Modern Israel came into being the following May, with the Declaration of Independence.

Today there are Palestinian Arabs and their supporters who base their demand for a “two state solution” on this 1947 partition plan.  Their claim does not stand:  International law says that one who rejects an agreement has no rights under that agreement.

Israel, the sole party to have accepted Resolution 181, is not responsible for its failure and is certainly not in violation of international law by not complying with it now.