The focus on this website is on modern Israel.

But the modern state is predicated upon and cannot be separated from the historical fact of an ancient Jewish presence in the land.

That presence is the rationale for establishing a Jewish state precisely where it is: it is the ground upon which much stands.  Not only was there an autonomous Jewish presence in the land 3,000 years ago, but the historical fact is that there has been no other autonomous presence in what came to be known as Palestine from the end of Jewish autonomy until the establishment of the modern State of Israel. What is more, in all the years from then until now, there has always been a Jewish population present on the land.

Evidence for the ancient Jewish presence is two-fold: there is the written record of the Hebrew Bible, Talmud and historical writings (such as those of Josephus who was alive at the time of the Destruction of Jerusalem and described it); and there is archeological evidence.

That archeological evidence is of considerable importance as Israel confronts a disinformation campaign run by the Palestinian Arabs that claims that there is no ancient Jewish link to the land.  That campaign is an effort to delegitimize the presence of Israel today.  But the evidence is clear, although far too extensive to document here.

An interesting note:  In 1999, the Islamic Wakf (trust) carried out major unsupervised and illegal excavations on the Temple Mount in order to construct a new mosque.  (The work was not stopped by the Israel Antiquities Authority because of fear of Arab riots.)  The site itself was disturbed and artifacts buried there were put at risk. Literally tons of rubble excavated from the site were dumped in the Kidron valley, mixed with garbage.  Dr. Gabriel Barkai, a prominent archeologist, sought funds privately and quietly to rescue what had been discarded. The process of sifting has yielded a wealth of evidence of ancient Jewish presence – evidence that would never have been otherwise discovered, as excavation on the Temple Mount is forbidden.  For example, coins have been found from the period of revolt against the Roman Empire before the destruction of the Second Temple, bearing phrases such as “For the Redemption of Zion.”

The sort of coin that was discovered

A great deal of other archeological evidence is also being unearthed in the area of the Temple Mount:  for example, there is work on the City of David, which was the original Jerusalem, and what is believed to be David’s palace has been discovered. 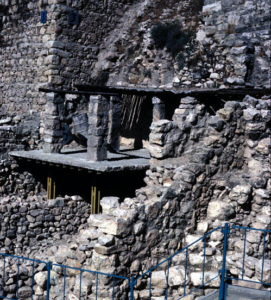 Excavations of the ancient City of David, on a hillside outside the walls of the Old City

The written record makes the connection between the people and the land as well. Many sites mentioned in the Torah text (Five Books of Moses) tie ancient history with the land today:

Shilo, where the Tabernacle (the portable precursor to the Temple that held the Ark) rested; modern Shilo is close to the ancient site. 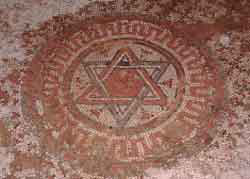 Beit El, where Jacob had his dream of the ladder; modern Beit El is close to the ancient site. 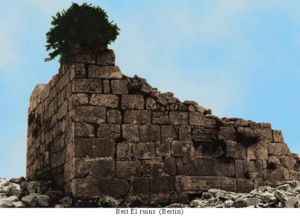 Ruin from the site of Beit El

Beer Sheva, where Abraham made a pact with Abimelech; modern Be’ersheva is close to the ancient site. 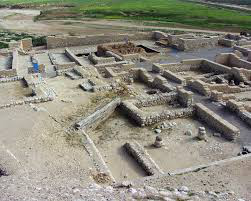 Hebron, where Abraham purchased the cave of Machpela for Sarah’s burial, and where the matriarchs (except Rachel) and patriarchs were all buried in time. To this day, for Jews Hebron is second in sanctity only to Jerusalem 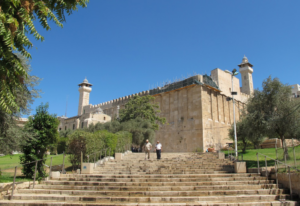 Cave of Machpela, Hebron – burial place of Patriarchs and Matriarchs

Shechem, which is where the Bible says Abraham first entered the land; the present day city called Nablus, under Palestinian Arab control, is near the ancient site of Shechem. 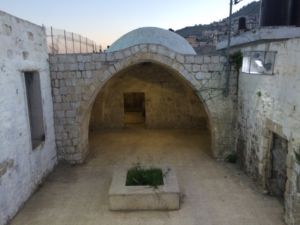 Joseph’s Tomb, in Shechem, which sustain considerable damage by the Palestinian Arabs in 2000

QUICK LOOK AT ISRAEL’S ANCIENT HISTORY:
According to Torah, Abraham was sent by God to enter Caanan.  This was roughly during the first half of the second millennium BCE.  A covenant was forged—through Abraham, Isaac and Jacob—that promises the land to the children of Israel through the generations.

Jacob, who had 12 sons, went down to Egypt, and there, in time the children of Israel were enslaved.  In the course of the Exodus, Moses brought them out:  they now numbered 600,000.

approximately 1220 BCE
The Bible recounts the entry of the Israelites into Caanan, and the conquest of the city of Jericho under Joshua, who is Moses’s successor.  The tribes form a loose confederation with each having an area of land.

approximately 1020 BCE
Saul is anointed king over the tribes by the prophet Samuel.

approximately 1005 – 995 BCE
Saul is killed in battle with the Philistines.  David gains control of the territory of Judah, in the south.  His capital is in Hebron.  At first Saul’s son rules in the north, but after he is assassinated, the northern tribes pledge allegiance to David as king.

David consolidates his strength and establishes an extensive kingdom.  He captures Jerusalem from the Jebusites.  Jerusalem becomes the capital and the religious center, where the Ark is located.

approximately 967 – 930 BCE
After David’s death, his son Solomon becomes king and strengthens the kingdom.  His overland trade with Arabia is legendary, as is his meeting with the Queen of Sheba.  This was a “golden age,” which saw a flowering of Biblical text.

Solomon arranged for the construction of the Temple, a magnificent building that used Lebanon cedar and housed the Ark.

approximately 928 – 724 BCE
After Solomon’s death, the northern tribes break away, anointing Jeraboam as the king of Israel. The northern capital is at Shechem and much later at Samaria.

Rehoboam, Solomon’s son, is king of the southern kingdom of Judah.

A succession of kings follows over the years….

approximately 722 – 628 BCE
The northern kingdom of Israel is overrun by the Assyrian army, with Samaria, the capital, the last to fall.  The inhabitants—constituting 10 of the original 12 tribes—are deported to various regions of the Assyrian Empire and assimilated. From this come legends of the “Lost Tribes.”  Today’s Jews are all descended from the southern kingdom of Judah (which incorporated the tribe of Benjamin).

approximately 588 – 587 BCE
The Babylonians lay siege to Jerusalem and then set fire to the Temple.

Thousands of inhabitants of Judah are either killed or sent into exile to Babylon, where they settle in.

The Temple is rebuilt. Nehamiah and Ezra the scribe bring back stringency of Jewish observance.

approximately 332 – 172 BCE
Alexander the Great takes Jerusalem.  Then follows a long period of Hellenization of the area, with control wrested from one foreign leader to another.

approximately 165 BCE
The Hasmonean family of priests in the Judean town of Modi’in leads a rebellion against the Hellenistic regime in Jerusalem. Judah the Maccabee wages war successfully.  Religious freedom is granted to Judea for a period of time. 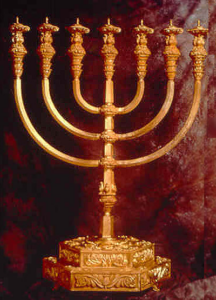 approximately 64 BCE
The Roman general Pompey captures the Temple in Jerusalem and violates it. He ends the Hasmonean regime and makes Judea a vassal state of Rome. Jews begin to move into exile.

approximately 40 BCE
Herod is named by the Roman Senate as king of Judea. He conquers Jerusalem, marries into the Hasmonean line and converts.  He does magnificent building – mostly notably an enlargement and refurbishing of the Temple. 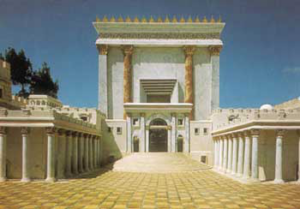 (Note: The Kotel, the Western Wall, a retaining wall supporting the expanded base for the Temple, was built during this time period.)

approximately 65 – 70 CE
The Jews of Judea plan a revolt against Roman rule.  Titus lays siege to Jerusalem and burns the Temple. 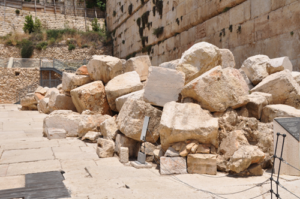 Stones remaining from the destruction

Many Jews go into exile. 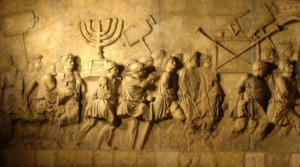 Relief from Arch of Titus in Rome, showing the exile

approximately 115 – 135 CE
A spirit of insurgency begins in Judea, in part in response to Roman decrees that the Temple may not be rebuilt and circumcision is forbidden. When the Jews, led by Shimon Bar Kohkba and supported by such sages as Rabbi Akiva, openly revolt, the Roman Emperor Hadrian crushes them.  There are hundreds of thousands of Jewish casualties and Jerusalem is turned into a pagan city.