Ideology and Goals
Hamas is a radical Sunni Islamic organization that has its roots in the Muslim Brotherhood of Egypt.

Its first goal is the destruction of Israel via Jihad and the institution of Islamic law (sharia).  To that end it seeks the Islamization and militarization of Palestinian Arab society.  It rejects secular nationalism and seeks the “liberation” of Palestine as Muslim Wakf land. Its covenant doesn’t even mention a Palestinian state as a goal.

While it shares with Fatah the goal of destruction of Israel, it differs in this respect: Fatah’s goal is nationalist – a Palestinian Arab state, Hamas is ideologically associated with an ultimate goal of world Islamic domination.

Its occasional gestures that appear to signal moderation are no more than surface.

Although it makes claims to the contrary, its military wing, Izz Al-Din Al-Qassam, cannot be separated from its political wing. 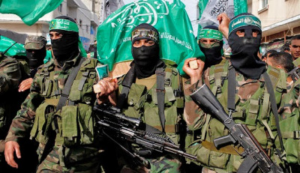 Founding
Hamas was registered in Israel as a social service agency called the Islamic Association by its leader, Sheikh Ahmed Yassin (pictured) in 1978. It worked to gain inroads with the people via its network of schools and hospitals, while promoting a fundamentalist Islamic perspective.

History to present
The movement began to more openly espouse violence and militancy at the time of the first Intifada in 1987 and changed its name to the Islamic Resistance Movement. (Hamas is an acronym of this name in Arabic.) It drafted its covenant in 1988.  And it proceeded to gain strength – particularly in Gaza, which is the Hamas stronghold.

Because of its terrorist activity, Hamas was outlawed by Israel in 1989; it is also on the US State Department list of Foreign Terrorist Organizations.  By the early 1990s, Hamas had become a major perpetrator of terrorist activities.  Over the years it has perpetrated horrendous attacks, very often suicide attacks.

Sheikh Yassin, who operated in Gaza, was assassinated by Israel in 2004, and next in command, Abdul Aziz Rantisi—who had co-founded Hamas with the Sheikh and headed Gaza operations— shortly thereafter.

Khalid Masha’al then assumed the role of head of the political bureau of Hamas, a position he retained until 2017.  At various times he operated from Damascus, Syria; Jordan; and, most recently, Qatar, which also provided funding.

His successor, Ismail Haniya (pictured), operates from Gaza. The fact that this is so suggests that the center of influence is now in Gaza.  Considerable pressure had been put on Qatar to break off support for Hamas.

As of early 2017, leader of Hamas in Gaza is Yahya Sinwar (pictured), a tough man who eschews all reconciliation with Israel and does not shy away from the prospect of violence.

“There’s not one minute of the day or night when we aren’t building up our military might,” he has declared.  Hamas has no intention of disarming.

Hamas had broken ties with Iran in 2012 (over the issue of the war in Syria), but Sinwar has announced that the Hamas connection with Iran is restored and once again excellent.  Hamas may have been prompted in this direction because of its diminished support from Qatar.

At one point there has been Saudi support as well, but that had been withdrawn because of the Saudi tensions with Qatar.

Connection to the PLO/PA
The links between Hamas and the PA existed from the time of the PA’s establishment.

The connection was made more overt by Mahmoud Abbas, after he became president of the PA in January 2005 and called for various terrorist entities to join in unity.

Hamas decided to run in the elections for the PA Legislative Council, in 2006. With an upset victory, they gained legislative control of the Palestinian Authority and a new government was formed with Hamas members in key positions.

Gaza take-over
From the time of Israel’s withdrawal from Gaza in 2005, this area had been under the control, however tenuously, of the PA (Fatah).  In June of 2007, Hamas executed a military coup in the Gaza Strip.  Members of Fatah were killed and Fatah headquarters were overtaken.  Fatah fled, and Hamas assumed control of Gaza.

Abbas then declared the Hamas-dominated PA government at an end and appointed a new government that was once again Fatah-based.

There has persisted within the PA great unease about the possibility of Hamas usurping control in Judea-Samaria.

From time to time there have been renewed efforts to establish unity between Hamas and Fatah.  Most recently in 2017.

Military stance
Following the takeover in Gaza, Hamas worked to amass munitions, and import and manufacture a variety of increasingly sophisticated rockets.  It also developed a fighting force that became an army.

Gaza was utilized as a base for terror attacks, and for launching rockets and mortars into Israel.

In the face of escalating violence, Israel launched Operation Cast Lead, for three weeks at the very end of 2008 into the beginning of 2009.  It ended with an Egyptian brokered ceasefire (a lull).

In 2012, Israel initiated Operation Pillar of Defense in response once more, to incessant rocket fire from Gaza. For the first time Hamas was utilizing long-range rockets.  This conflict lasted eight days before ceasefire was brokered.

Again in 2014 there was war.  Hamas involvement in the kidnapping and murder of three Israeli students precipitated an Israeli crack-down on Hamas leaders in Judea and Samaria.  The Hamas response was a persistent barrage of rocket fire. Israel then launched Operation Protective Edge, which involved aerial attack and ground troops.  This conflict lasted seven weeks before ceasefire.

A major concern in this conflict was the network of tunnels that Hamas had constructed under Gaza, some of which extended into Israel. These tunnels were for transport and storage of rockets, movement of Hamas fighters, and kidnapping of Israeli soldiers, as well as for allowing terrorists to sneak into Israel to launch major attacks.  IDF soldiers inside of Gaza were charged with identifying such tunnels. A good number, but not all, were destroyed.  Since this conflict Hamas has worked diligently to rebuild that tunnel network, utilizing resources intended for the residents of Gaza to do so.

In each of the above conflicts, Israel sought to increase deterrence and severely weaken Hamas capabilities; there was no intent to wage war until the final destruction of Hamas.  Hamas never agrees to a permanent end of hostilities – that would run counter to their goals.  Their temporary ceasefires are utilized to re-build strength that had been destroyed during hostilities.

Prisoners
It is Hamas works via various devious means to seek the release of its prisoners in Israeli hands.  Repeatedly there have been kidnappings or attempted kidnappings that had the goal of securing the release of prisoners in trade.  Bodies of two IDF soldiers who died in the fighting in 2014, Oron Shaul and Hadar Goldin, are being held by Hamas.  Additionally, at least two Israeli civilians who wandered into Gaza are being held.