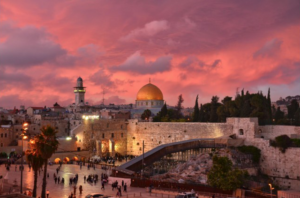 ♦ There has been a continuous Jewish presence in Jerusalem for 3,000 years.
♦ The Mandate for Palestine applies to Jerusalem.
♦ The internationalization of Jerusalem, called for in the “partition plan,” is null and void.
♦ Israel took eastern Jerusalem from Jordan, an illegal occupier, in a defensive war.
♦ Israel Basic Law: Jerusalem, complete and united, is the capital of Israel.

Historical connection
• The Jewish connection to Jerusalem dates back more than 3,000 years, to the time when King David made this city his capital.

Today, outside the walls of the Old City, there are the archeological remains of Ir David, the City of David – believed to be King David’s original city.

David’s son, King Solomon, built the First Temple adjacent to the city, on Har (Mount) Moriah. It was subsequently destroyed by the Babylonians, who exiled the Jews.  After they returned, the Second Temple was built and later enhanced.  The Western Wall (Kotel) that stands today is a part of the retaining wall that supported the enlarged Mount upon which that Temple stood.

• The Romans destroyed the Second Temple 2,000 years ago and ended the Second Jewish Commonwealth. Over the course of centuries, Jerusalem was then enfolded into the various empires of conquering forces.

However, in those 2,000 years Jerusalem never served as the capital of any other nation or empire.

• In spite of varying circumstances, there has been a continuous Jewish presence in the City, except for a brief period immediately after the Roman destruction, and a short time during the Crusades.

By the last years of the 19th Century, Jews had again become a majority in the City. In 1914, there were 45,000 Jews in Jerusalem out of a total population of 65,000 and that percentage remained stable for decades.

Jerusalem is within the boundaries of Palestine as stipulated by the Mandate.

Internationalization of Jerusalem null and void
• On November 29, 1947, the UN General Assembly passed Resolution 181, which called for the partition of Palestine into Jewish and Arab states to be joined by an economic union; it created an internationalized corpus separatumfor the Jerusalem area, which was to be administered by the UN.

Like all General Assembly resolutions, this was only a recommendation and not binding in international law. The terms of the recommendation would have gone into effect if both parties – the Jews and the Arabs – had accepted it. But the Arabs immediately rejected it.

Any claims by Arabs or others today that Israel is bound by Resolution 181 are fallacious.

• When independence was declared in 1948, armies from five neighboring Arab states invaded Israel.

However, at no point did the UN, which claimed jurisdiction over Jerusalem, act to counter this illegal invasion as it impacted the city.

“We are no longer morally bound by the U.N. resolution of November 29, since the U.N. was unable to implement it. In our opinion the decision of 29 November regarding Jerusalem is null and void.”

Division of Jerusalem not legal
• At the end of the War of Independence in 1949, Israel held western Jerusalem.

Jordan had occupied the eastern part of the city – which encompasses major areas of Jewish heritage, including the City of David, the ancient Jewish cemetery on the Mount of Olives, and Jewish holy sites such as the Western Wall and Har Habayit (the Temple Mount).

This occupation, as well as the occupation of Judea and Samaria more broadly, was illegal; Jordan had taken the territory in an offensive war.

• Jordan rendered eastern Jerusalem Judenreinand—in spite of guarantees in the armistice agreement—denied Jews access to their holy places in that part of the city.  Thus the erroneous impression that eastern Jerusalem is “Arab” evolved.

Jerusalem as Israel’s Capital
Immediately after the War of Independence, arrangements were started for the Knesset to meet in Jerusalem. By the end of 1949, the transition was made from Tel Aviv to Jerusalem.

“…for the State of Israel there has always been and always will be one capital only – Jerusalem the Eternal. Thus it was 3,000 years ago – and thus it will be, we believe, until the end of time.”

• On January 23, 1950, the Knesset passed a resolution proclaiming Jerusalem the capital of Israel.

Israel’s Legal Rights after the Six-Day War (1967)
• The circumstances of the Six-Day War along the Jordanian front strengthened Israel’s claims in Jerusalem. Hostilities with Egypt began early in the morning on June 5, 1967, but at that point Israel did not take any action against Jordan. Nonetheless, Jordan opened an artillery barrageon western Jerusalem and moved forces into the no-man’s land.

Within an hour Prime Minister Levi Eshkol had sent a message to King Hussein through the commander of the UN Truce Supervision Organization: “If you don’t intervene, you will suffer no consequences.”  Jordan intensified its attack anyway, and suffered the consequences.

• On June 27, 1967, the Eshkol government, with the backing of the Knesset, extended Israeli law, jurisdiction, and administration to the eastern part of Jerusalem.

According to Israel’s Supreme Court, the eastern section of Jerusalem had become an integral part of the State of Israel.

New municipal boundaries were created.  Jewish neighborhoods in eastern Jerusalem were restored, some synagogues destroyed by the Jordanians were rebuilt, and new neighborhoods were established.

Jordan’s position in Jerusalem had resulted from its 1948 invasion of the city, which was defined by the UN Secretary-General at the time as an act of “aggression,” while Israel’s standing in Jerusalem resulted from a war of self-defense.

In 1970, international lawyer Stephen Schwebel—who later became president of the International Court of Justice—wrote that the rights to a territory of a state acting in self-defense are superior to the rights of an aggressor attacking that same territory.  With regard to Israel, he wrote:

“Israel has better title in the territory of what was Palestine, including the whole of Jerusalem…”

The Knesset and the Supreme Court are in Jerusalem, as are the residence of the prime minister and the president’s house.

On January 2, 2018, the Knesset passed an amendment to the Basic Law: Jerusalem; it requires a two-thirds majority of the Knesset to relinquish any part of Jerusalem.

Palestinian Arab Claims
Today the Palestinian Arabs claim rights to “East Jerusalem.” They say that Israel must pull back in Jerusalem to the “1967 border,” which would place the Temple Mount, the Kotel, and other sacred Jewish sites in Arab hands.

But there is no 1967 border. The line being referred to is only the 1949 Armistice Line, drawn when the fighting between Israel and Jordan came to a halt.  The line— which simply designated the locations of the two armies—was intended to be temporary: the Armistice agreement, at the insistence of Jordan, states this clearly.  The line was not to prejudice future negotiations to determine a final border.

What is more, the Armistice agreement was between Israel and Jordan.  Palestinian Arabs played no part in this.  It thus defies all logic that they should today claim part of Jerusalem as “theirs.”

The Temple Mount
The Palestinian Arabs place special emphasis on Har Habayit, the Temple Mount, to make their case. In the face of enormous archeological evidence to the contrary, they claim that it is an exclusively Muslim site and that Jews have no connection to this most sacred place.

They assume this position because it threatens the very heart of Jewish identity in the land.  Scholars note that Muslim emphasis on the importance of the Mount increases when Israel’s political position is strong.  In point of fact, Muslims praying on the Temple Mount face Mecca, which is Islam’s holiest site, with Medina the second holiest.  Jerusalem is not mentioned in the Koran even once.

There had already been two Jewish Temples on the Mount before the founding of Islam in the Seventh Century CE.  The Dome of the Rock, which is situated on the site where the Temples stood, was built in 691 CE, when the region was under control of the Umayyad Caliphate.  It is not an accident that it was placed over the site of the Temples, as Muslims believe that they are the successors to Judaism and Christianity.  The Al Aksa Mosque was built in 705 CE, during that same Caliphate.

Today, while Israel maintains sovereignty on the Mount, responsibility for day-to-day administration is conferred upon the Jordanian Wakf— Islamic Trust. Tensions on the Mount remain high, and Jews have yet to be accorded their full rights there.

1) If the Palestinian Arabs are truly claiming only “East Jerusalem” as theirs, it further defies logic that they should object so vehemently to the American Embassy being moved to western Jerusalem, which would presumably be Israeli.

In point of fact, in Arabic, the Palestinian Arabs routinely expose their true intention: to possess ALL of Jerusalem.  On PA TV, for example, reference is made to “the occupied Arab city of Jerusalem.”

2) When the Palestinian Arabs refer to “East Jerusalem” and “West Jerusalem” this conjures up a mental image of the city divided down the middle.  Yet this is not remotely the case: “East Jerusalem” refers to everything that was beyond that Armistice line, which came to be referred to as the Green Line. 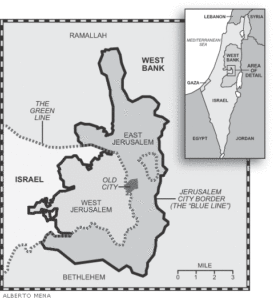 3) The international community, most notably the UN and the EU, take arbitrary and mutually exclusive positions on the issue of Jerusalem as it suits their needs:

[] Some of the positions taken by the international community indicate a shifting away from discussion of a negotiated final status settlement to earlier stages of the conflict.

This is because the refusal to recognize Jerusalem as the capital of Israel predates 1967 and has nothing to do with the “two-state solution,” settlements or occupation.

[] In 1949 the General Assembly passed Resolution 303-IV. Based on the 1947 Partition Plan for Palestine, it called for the internationalization of Jerusalem and Bethlehem. Yet in the last 20 years, Europeans have generally recognized Bethlehem to be part of the Palestinian territories, essentially making the notion of separate international bodies irrelevant. But if the EU and European nations do not recognize west Jerusalem as part of Israel, logic dictates that they also should not recognize Bethlehem as part of the Palestinian territories.

Similarly, when European leaders state that Jerusalem’s status should be decided in final-status negotiations, logic would suggest that they should also make similar statements about Bethlehem, a once Christian city, now predominately Muslim.  Yet, the Europeans would never do this, assuming instead positions that are frequently self-contradictory.